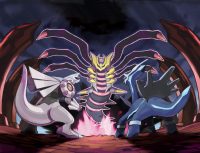 Pokemon TCG Live’s database has revealed our SWSH11 set will be named Lost Origin. It should release internationally on August 26th, 2022.

Our set will obviously be based on Japan’s Lost Abyss set, which releases in June. Judging by the name, the set could feature Giratina and the return of the Lost Zone.

Lost Origin should also feature the cards from Japan’s Dark Phantasma, which releases a month earlier in May. That set could feature a Pokemon like Darkrai or Hisuian Zoroark.

We also know there are future Japanese sets named Incandescent Arcana and Paradigm Trigger. Those should release in Japan this summer. One of them could also be part of Lost Origin, while the other may be the first part of our November set. But these releases are too far out to make accurate predictions.

Both the English and Japanese sets have “Lost” in their name, which seems to be hinting at the return of the Lost Zone from 2009’s Platinum set. The mechanic is heavily associated with Giratina. The Lost Zone is an “out of play” discard pile. Cards can’t be retrieved from it once they’re banished there. The mechanic was reintroduced in 2018’s Ultra Prism, but went back into retirement a few sets later.

Thanks goes to @lewymd for informing us of this news!