The official Japanese Pokemon card website has revealed the first cards from Pokekyun Collection, which will be released in Japan on January 29th. In America, we’ll get it in our Generations booster packs starting in February. It is a 32-card mini-set.

Thanks goes to Mia V., Andrew C. and Jake C. for the translations below!

Tomorrow I will be making that big PokeBeach announcement I promised two weeks ago. Sorry for the delay!

[C][C] Dress Up: 30+ damage. If this Pokemon has a Pokemon Tool card attached to it, this attack does 30 more damage.

[Y] Sparkle: If the Defending Pokemon tries to attack during your opponent’s next turn, your opponent flips a coin. If tails, that attack does nothing.

(Reprint of Diancie from Phantom Forces.) 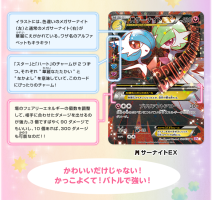 [Y][C][C] Brilliant Arrow: This attack does 30 damage times the amount of [Y] Energy attached to all of your Pokemon. 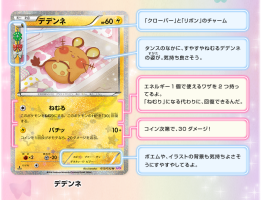 [C] Sleep: This Pokemon is now Asleep. Heal 30 damage from this Pokemon. 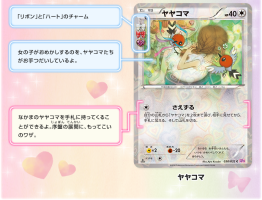 [C] Tweet: Search your deck for up to 2 Fletchling, reveal them, and put them into your hand. Shuffle your deck afterward. #callforfamily

Ability: Thankful Aroma
Once during your turn (before your attack), you may heal 20 damage from each Basic Pokemon on your Bench.

[G][C][C] Flower Gain: 60 damage. Heal 20 damage from this Pokemon and remove all Special Conditions from it.

Shaymin-EX is a promo card that will be included in a special “Pokekyun Collection Premium Set,” which will cost 3,000 yen (about $30). It will also be released on January 29th. It’ll come with everything pictured below: 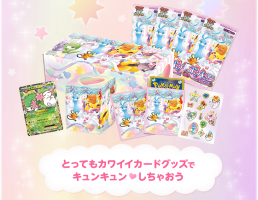