I will be making a huge PokeBeach New Years announcement tomorrow! If you don’t have a PokeBeach premium subscription, you may want to grab one before then. I hope everyone is having a Happy New Year’s Eve! (Update: I apologize, but technical difficulties have  delayed the announcement. Please stay tuned.)

Umbreon-EX from XY10, Awakening of the Psychic Kings, has just been revealed super early! The card is #042/078. It seems the card was revealed in a magazine, though we have no confirmation where it originates from at this time (update: it’s from a promotional image advertising the new Pokemon TCG Lottery campaign that started at Pokemon Centers today). Thanks goes to @kaede_poke from Twitter for sharing the image!

XY10 set will be released in Japan on March 18th. Thanks goes to Bangiras for the translation! 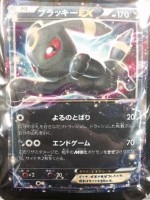