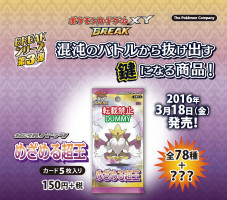 The news we’ve all been waiting years for!

Alakazam will make a triumphant return to the TCG in Japan’s tenth XY set, Awakening of Psychic Kings, which will be released on March 18th. The set will feature Alakazam-EX and M Alakazam-EX. It’ll contain 78 cards, excluding secret rares. This will be the third BREAK set.

Alakazam last appeared in the TCG as the Basic Pokemon “Alakazam 4” and its Level.X card “Alakazam 4 LV.X” in Rising Rivals, which was released in 2009. Before then, the last “regular” Alakazam was in 2007’s Mysterious Treasures. The set featured an Abra with an “Ultra Evolution” attack, allowing it to evolve straight into Alakazam without Kadabra (since Kadabra was mysteriously absent from the set). According to a few interviews I’ve held with Pokemon officials over the years, including one with Masamitsu Hidaka back in 2008, Kadabra has apparently been shelved in the TCG due to a lawsuit with Uri Geller. He’s a magician known for bending spoons and Kadabra is based on him (Kadabra’s name, Yungerer, pays homage to that inspiration). Uri Geller sued Pokemon back in 2000 when he saw a Japanese Dark Kadabra card from the Team Rocket set (the card is named “Evil Yungerer” in Japanese). It appears the TCG ban went into effect between 2002’s Skyridge (when Kadabra was last a card) and 2007’s Mysterious Treasures (when Kadabra was noticeably absent). Luckily, like the old Elite 4 cards, Pokemon-EX are Basic Pokemon and don’t need their pre-evolutions, so Kadabra’s ban won’t affect an Alakazam-EX.

XY10 will also see the release of a Mega Alakazam deck box and a 32-pack of Zygarde Complete Forme card sleeves. Each will cost 362 yen, or about $4. The deck box can hold 90 sleeved cards.

But we’re not finished! March 18th will additionally see the release of a 60-card M Audino-EX Mega Battle Deck as well as a 60-card Zygarde-EX Perfect Battle Deck. Each deck will come with damage counters, Status Condition markers, a play mat, a coin, and an instructional booklet, all for 1,556 yen (about $9). Presumably the Audino deck will also come with Diancie since it’s on the packaging. This will be the first time Zygarde gets a card in the TCG since appearing in 2013’s Pokemon X and Pokemon Y.

Since Zygarde won’t be the mascot for XY10, it seems we’re not going to get a game featuring him in the spring. 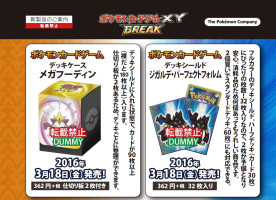 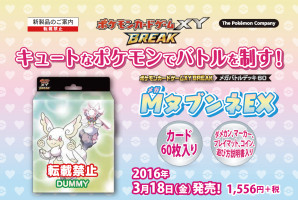 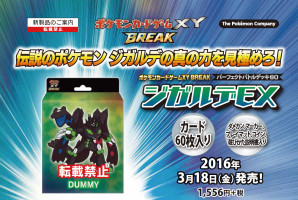