The secret rares from Time Gazer and Space Juggler have now been posted to social media! We translated both sets last week. They will release in Japan on Friday.

Many of the cards from these dual sets will become part of May’s Astral Radiance set. The cards from Battle Region will also be used for our set. However, because the three sets have too many cards, we expect a good portion of them will be cut and saved for August’s Lost Origin set.

Dialga’s special art shows different phases of the moon at the same time to reference its ability to control time. 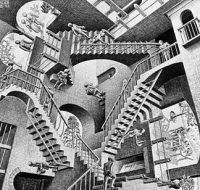 For the very first time ever, a Pokemon is not at the correct position in the set list!

The Japanese TCG has always ordered Pokemon by type, so Water-type Palkia always come after Fire-type Heatran (Grass -> Fire -> Water -> Lightning -> etc). But the two Pokemon are switched at the beginning of the secret rares! My personal explanation is that because Palkia controls space, it moved its position within the secret rares to trick collectors. And I’m not just saying that as a joke, I bet Creatures did it on purpose for that reason. If true, this is a pretty neat way to implement Palkia’s lore within the landscape of the TCG.

Later in the secret rares, Heatran is correctly before Palkia. This seems to indicate the two different positions were on purpose; there’s no way Creatures didn’t notice this “mistake” within the same set.

Palkia’s special art seems to be a reference to MC Escher’s “Relativity.”