Hello everyone! In-person Pokemon tournaments are back, and while they may still be limited (I’ll be eagerly awaiting League Cups and other local events), it’s wonderful to finally be returning to something resembling normalcy in the Pokemon TCG world. Each region has now had their first Regional Championships, and while we don’t have the full deck list data from those events, they do give us a good picture of what has been successful in this Brilliant Stars meta.

So far, eleven different archetypes have made it into Day 2, a number which goes up to 20 if you divide out the different Arceus VSTAR decks. It’s hard to argue that the format hasn’t remained diverse! With that said, Mew VMAX and Arceus VSTAR have been particularly dominant over the first four Regional Championships. Thus far, Mew VMAX has gotten 10 of the 32 Top 8 spots, whereas Arceus VSTAR has gotten 13. That’s only slightly below their meta percentage in Day 2, where between the two decks, they’ve accounted for a whopping 75% of Day 2 placements over the course of the first four Regionals. That’s an impressively high meta share!

Just to illustrate, the current Day 2 meta share of both Mew VMAX and Arceus VSTAR are similar to the peaks of decks like Reshiram and Charizard-GX during the initial Unbroken Bonds format, Pikachu and Zekrom-GX during the initial Team Up format, or Zacian V / Arceus and Dialga and Palkia-GX. In those cases, there was one extremely dominant deck — but in today’s Standard meta, there are two! So, even though there are quite a few different decks right now, the centralization around that pair of archetypes is rather extreme. This makes it challenging to play counter-meta decks, since you somehow have to account for both Mew VMAX’s strengths as well as those of Arceus VSTAR. Beating one deck is easy enough, beating both, not so much. Arceus VSTAR in particular poses a challenge in that regard, since while Arceus VSTAR is a great stand-alone attacker, it’s like Zoroark-GX in that you can play it with all sorts of things, and what beats some of those decks may not be able to beat the other ones.

For those that can take on both, a lot of success awaits. Thus far, Malamar and Gengar VMAX decks have had the most success in doing so, followed a bit further back by Suicune Vand Jolteon VMAX. Robin Schulz’s Rapid Strike Urshifu VMAX deck also is notable here, as it won Liverpool, despite the fact that the Rapid Strike archetype has traditionally been poor against Mew VMAX decks. That deck is a clear sign that the metagame is evolving, as players start to recognize the centralized nature of our current format, and adapt to it appropriately. 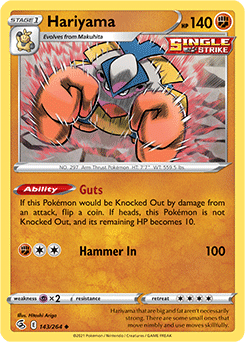 Aside from the meta decks, there are a few interesting new off-meta decks that folks have been able to pilot to strong finishes. Sander Wojcik’s Zoroark Control deck and Thiago Giovannetti’s Arceus VSTAR / Whimsicott VSTAR are among my favorites, but for this article, I’ll be taking a look at a different deck, Teodor Skjæveland’s “Bulk” deck, aka Hariyama / Houndoom / Morpeko. This deck didn’t finish quite as highly as the other two I mentioned, as Teodor placed 29th with it. But compared with the other decks to come out of the first round of Regionals, I think it has been considerably overlooked. Part of that may be due to the amusing nature of the Pokemon included — if you’ve played with Hariyama before this, you’re likely either old enough to remember the original ex era, or an avid player of Pokemon Cube Drafts — or it may be because people are simply trying out the other decks first. Still, it’s a bit surprising; even in online events, which tend to showcase a wider variety of decks, no one is playing Hariyama! After trying this deck out myself, I am confident that it isn’t being ignored because it isn’t a good deck; on the contrary, I’ve been rather impressed at how well this deck counters our current meta. So much so, that I figured I would write an article about it, in the hopes that it would no longer be quite as overlooked.

First, if you aren’t familiar with Teodor’s Hariyama list, here it is:

At its core, this is a non-Pokemon V Single Strike deck, in the same vein as similar decks built around Morpeko, Stonjourner, or Seviper. Like those decks, the plan here is to trade efficiently with your opponent, by 2HKOing other Pokemon V, Pokemon VSTAR, and Pokemon VMAX, while only giving up one Prize at a time on your end. These Single Strike decks don’t hit as hard as some other non-Pokemon V decks (like Malamar), but they do have excellent typing, which can make them viable. Given a field where Dark-type and Fighting-type weaknesses are prevalent, the typing of Single Strike is a tremendous asset. Mew VMAX, Arceus VSTAR, Gengar VMAX, and Jolteon VMAX are all weak to either Fighting-type or Dark-type, and so can be OHKO’d by your non-Pokemon V Single Strike attackers. If you can trade one-for-one, and get extra Prizes each time compared to your opponent, you should win every time.