Three months ago, I revealed preliminary information about an upcoming Pokemon TCG product called “XY: BREAK Starter Deck” that will be released in Japan for Pokemon’s 20th anniversary. Its box art is the same as the first Pokemon TCG product released in 1996, and the product’s info sheet highlighted the design choice was meant to evoke nostalgia.

While the original 1996 product obviously contained cards from the first Pokemon TCG set, Base Set, no such promise was made for 2016’s deck. In fact, the title of the product retained the current era’s title, “XY: BREAK.” This was the biggest clue the deck would most contain modern cards and that its nostaliga was only skin-deep.

Last week, Pokemon officially revealed the deck on their website. We of course posted a news story here within minutes of its official reveal and our large translation team of Pokemon TCG fans concluded that the product listing only stated that the deck would be “revisiting” Base Set. Like in October, nothing was stated about the deck’s contents other than it will contain 60 random cards. For all we knew, “revisiting” meant what the product info sheet highlighted months ago – that the design is revisiting Base Set. The point is, nothing was stated about the actual cards.

Cut to yesterday. A large gaming website mistranslated and misinterpreted the news from the official Japanese website, posting that the official Pokemon website had stated Base Set was to be re-released. Okay, fine, they misinterpreted the news – I mean, who wouldn’t think Base Set cards were being reprinted if they’re not a Pokemon TCG fan who follows this stuff? It’s an honest mistake, I’ll give them that.

But then as I continued reading… a couple of details that were never stated anywhere showed up in their article. The only way these statements could have been made is if the authors went out of their way to make them up. The official Pokemon website they cited as their source never stated anything along the lines of what these journalists were claiming.

The very first set of Pokémon trading cards is getting a re-release, just in time for the series’ 20th anniversary. On Feb. 27, Japanese Pokémon fans will be able to purchase the original base set in its first reprinting in years, according to the official trading card game’s Japanese site… Featured on the cards are designs identical to their 20-year-old counterparts.

And then of course the news spread everywhere, with no one checking the original source, asking questions, or doing any kind of basic research. Most of them just parroted each other and thus the misinformation spread like a California wildfire. I started to have flashbacks to the time Nintendo sent me a cease and desist over my coverage of Pokemon Black & White. Many gaming websites parroted false statements and interpretations other websites made, and they all failed to do any kind of basic research like reporters should. (It makes me wonder what else these gaming websites misreport, or even the media in general.)

Keep in mind that the following websites are reporting about a completely random Pokemon product that only has a nostalgic design and using said news to state or imply that Base Set is being reprinted. Even if they were only announcing this product, there are much larger 20th anniversary TCG products these websites never posted, so they’re giving weight to something that’s not important only because the aforementioned website made a big deal out of it (proven further by the fact the news was over a week old and they all just happened to post it within the same few hours). Even on PokeBeach, a fansite dedicated to Pokemon, this product was so unworthy it was posted within other articles. Many of these gaming websites copied the made-up “facts” the first site reported, like good journalists:

Prepare for playground wars to erupt once more — the original Pokémon trading cards are getting reissued, as part of the 20th anniversary of the franchise… The 60-card base set will reproduce the 1996 editions perfectly, with the original character art and designs intact.

Next year, the Pokemon trading card game reaches its 20th anniversary — the cards first went on sale in Japan in October 1996. To help bring back some memories, the original starter pack will be re-released on February 27 for 1,300 yen ($10.80).

It has been announced that the original Pokémon trading card game starter pack will be re-released in Japan on February 27th 2016.

Next year is Pokémon’s 20th anniversary. To mark the event, the card game’s first starter pack is getting a re-release.

Title: First Edition Pokémon Trading Cards Are Getting A Reprint For The 20th Birthday Of The Franchise
Author: Damien McFerran

That means that next year is the 20th anniversary of the birth of the franchise, and to celebrate this milestone fans will be able to purchase the very first base set of Pokémon cards – in Japan, at least. The set will include 60 cards, a manual and coin. The cards will be identical to the original print run, and launch in Japan on February 27th, 2016.

It looks as though the first edition Pokémon trading cards are going to get a reprint in 2016 for the 20th Birthday of the Pokémon franchise, based on information on the official Japanese Pokémon TCG website.

… And then there’s this little dozy–the first rerelease of the original base set of Pokémon trading cards, complete with identical designs and artwork! On February 27, 2016, Japan will get to catch 60 original base set cards, a special-edition player’s manual, and a collector’s coin for a to-be-determined price. Oh, we can already feel the import wars online stirring!

And then the “news” became so popular it ended up on Facebook: 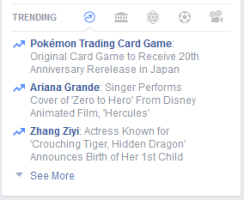 And then the few fans who tried posting the correct answer were downvoted into oblivion on Reddit, a site which prides itself on users promoting the best comments and culling the “worst.” In this case, the “news” had over 1,600 upvotes while the actual correct answer had -1. It was subsequently hidden from the discussion:

I and other Pokemon TCG fans in-the-know immediately jumped to action and e-mailed, Tweeted, Facebooked, and messaged the authors of many of the above news stories. I even posted an article yesterday stating what we do know, acknowledging that while it’s possible we may get Base Set reprints, nothing has been confirmed by an official source.

However, none of the authors responded even though some of them were active on social media after we reached out to them multiple times. We’re not sure if this is because they didn’t see our messages, didn’t care, or didn’t want to own up to their mistakes. People sometimes have difficulty doing the latter, so I imagine we won’t see many retractions. That’s why you should always go to people who do know what they’re talking about when it comes to news like this. If we at PokeBeach are ever wrong about something (and of course in 13 years of covering Pokemon news on this site I have been wrong before), we’ll go out of our way to let you know so you’re not misinformed.

So now we have some actual news! We have just discovered (a little late) that Amazon Japan has actually posted a full description of the product in question along with an image. Thanks goes to Ryah R., our head translator, for the translation:

The set includes 1 random deck (60 cards), 32 damage counters, 2 markers, 1 coin, and an instruction book. The cards are random. Due to the nature of a constructed deck, it will contain some duplicate cards.

So there you have it: the majority of the deck will contain reprints of cards from the past few years (so certainly not 60 Base Set cards from 1996). Therefore, what all of the above news websites reported or implied is incorrect (as we stated yesterday). To think news so false became so popular and wound up on several large websites and even Facebook’s right menu… it makes you wonder how often real news organizations misreport, lie, and spread incorrect news about real issues that we gobble up and accept without thinking twice about.

The blurb does however imply “a few” cards outside of the last two eras will be reprinted. This could mean any card from the Black and White era’s last set, Plasma Blast, all the way back to Base Set. But there’s an additional clue in the blurb: it goes out of its way to say all the cards in the deck will have modern card backs. This seems to be implying that the “few” cards they’re reprinting had the old Japanese card backs originally. This would narrow down the selection to cards from Base Set to around Neo Destiny. You can go further and assume that the reprinted cards will all be Base Set cards because of the packaging, but even then, this is still unconfirmed and it would only be a “few.”

We still don’t know what America’s Generations booster packs will contain, but it could be whatever those “few” reprinted cards are. If the selection of reprinted cards in the new Starter Deck does in fact span several years of sets, it would make sense why our booster packs are named “Generations” (if in fact they do contain cards from this BREAK Starter Deck). Or – an even more random theory – what if they’re cards America never got from Japan, such as the Vending Machine cards? The point is, we don’t know anything at this point.

As usual, you can stay tuned to PokeBeach for the latest Pokemon news! Maybe now since the fake news turned out to be so popular Japan will take the hint and reprint all of Base Set in the future. Maybe for the 25th anniversary? Hopefully I’ll be in the film industry by then. :p

Update: GoNintendo reached out to us and has now corrected their story.

Update: Anime News Network reached out to us and has clarified the confusion (on their forum).