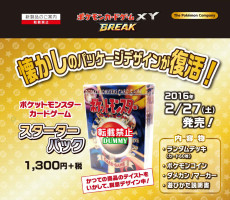 Releasing in Japan on February 27th is the “BREAK Starter Pack.” It will come with 60 random cards, a coin, damage counters, Special Condition markers, and a rule book. The ad says it will be a “Random Deck.”

Surprisingly, the product packaging is exactly the same as the original Japanese “Starter Pack” that was released alongside Base Set in October 1996 (pictured on the right). That starter pack also came with 60 random cards. The ad even says “Look at this nostalgic design!” So this new pack is obviously a throwback to the original one (or will be since the packaging above is still dummy artwork).

This product is obviously being released since 2016 is the 20th anniversary of Pokemon. The new pack will more than likely will contain cards from the BREAK era since it’s in the title of the deck’s name, but wouldn’t it be cool if the pack instead contained reprints of Base Set cards for Pokemon’s 20th anniversary? Unfortunately, the packaging is probably as far as the nostalgia will go. But you never know! 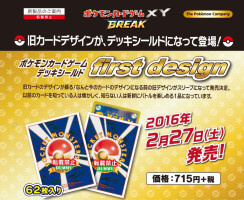 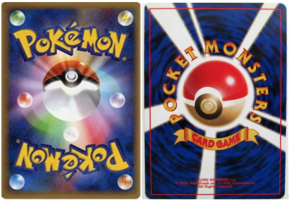 Also releasing February 27th are a pack of 62 card sleeves featuring the original backing of Japanese Pokemon cards (pictured on the very right). The pack of sleeves will cost 715 yen. Now you can make your Pokemon cards look like they have the backs of classic Japanese cards!

The backing was changed to the current design (left) in August 2001 for the Japanese Pokemon VS set. This was so Japanese cards would have the same recognizable yellow and blue English “Pokemon” logo like the rest of the world was using (instead of “Pocket Monsters”).