The prerelease promos for Lost Origin have been revealed! They are Finneon (SWSH240), Gengar (SWSH241), Comfey (SWSH242), and Machamp (SWSH243). Lost Origin, which officially releases on September 9th, will be the first set since Sword & Shield base set to have sanctioned prerelease events, which will likely begin on August 27th. 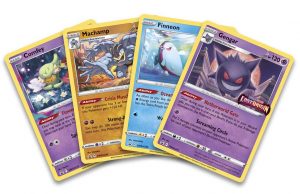 Each of these cards comes from Dark Phantasma or Lost Abyss, but with alternate artwork. Finneon has yet to be revealed from Lost Abyss, so this is the first we’re seeing its ability and attack, which are partially obstructed.

Ability: Ocean ??
As often as you like during your turn… [W] Energy from your… has the Swim Freely attack.

Ability: Netherworld Gate
Once during your turn, your may put this card from your discard pile onto your Bench. If you do, put 3 damage counters on this Pokemon.

[P] Shrieking Circle: Put 2 damage counters on your opponent’s Active Pokemon for each of their Benched Pokemon.

Ability: Flower Picking
Once during your turn, if this Pokemon is in the Active Spot, you may look at the top 2 cards of your deck and put 1 of them into your hand. Put the other card in the Lost Zone.

Ability: Crisis Muscle
If your opponent has 3 or fewer Prize cards remaining, this Pokemon gets +150 HP.

Member
FINNEON! Finneon and Lumineon are really getting some love, and I am here for it!
M

Member
Machamp will be stupid good in competitive

Member
From this piece of news, I can now say that both Finneon AND Lumineon will be in the set. I hope Lumineon still has zero Retreat Cost.

Member
Lmao, that Machamp is such a mistake for a prereleases 4-prize format

Member
i wonder what the swim freely package will do, it may be semi-viable if theyre confident enough to give it a prerelease promo

Polaris said:
Lmao, that Machamp is such a mistake for a prereleases 4-prize format
Click to expand...

I suspect that's why there are two different Psychic-type evolution lines in the kit.

JustInBasil said:
I suspect that's why there are two different Psychic-type evolution lines in the kit.
Click to expand...

It's a good thing Gengar does damage then, instead of placing damage count- whuh oh.

Rooie said:
It's a good thing Gengar does damage then, instead of placing damage count- whuh oh.
Click to expand...

But yes, there are probably other psychics; hopefully they can deal a good chunk of damage to that monster. I'd be happy with any of these; hope the finneon is good!
Last edited: Jun 26, 2022
P

Member
Ahhhh, another terrible Gengar art. Machamp wants to get high.
B