Hello PokeBeach readers! Isaiah here and I am excited to be bringing you yet another article! Last time, I talked quite a bit about single-Prize Pokemon in Standard, focusing on Malamar and Hoopa / Galarian Moltres. Since publishing that article, Malamar has started to see a bit less play due to the meta going in a direction that is not productive to Malamar’s success. Conversely, Hoopa / Galarian Moltres has been steadily increasing in popularity, even with the growing popularity of Jolteon VMAX in the past weeks, largely because Mew VMAX is played so much more than every other deck in the format. In addition, Hoopa / Galarian Moltres’s popularity has inspired a massive rework of the Sableye V / Galarian Weezing / Inteleon archetype, which has seen massive amounts of success since being reinvented.

Aside from these changes, there has not been a lot going on in Standard. As such, many people have looked to other ways to enjoy the Pokemon TCG. One popular candidate has been Andrew Mahone’s Gym Leader Challenge format, which has previously been covered by fellow author Grant Manley.

In addition, people have started to look deeper into the Expanded format, which generally has gone untouched with limited numbers of Expanded events online. Personally, I have gone with the Expanded format approach, largely thanks to some in-person events in my home state, even though I am historically not a huge fan of the Expanded format. As I have dived into Expanded, I have been pleasantly surprised by the number of viable decks there are, which is a dramatic deviation from the current Standard format. With that, how about we take a brief look at the overall state of Expanded.

The State of Expanded 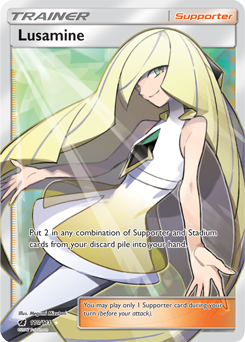 Since the final Regional Championship of 2020, the Expanded format has been in a bizarre state. Stall decks and other lockdown strategies have run rampant in varying capacities and when you are not playing one of these, the next choice is to play something hyper-aggressive. Currently, stall decks are built by using Pyroar and Altaria as two of the strongest walls while also including forms of Energy removal and other board control that can be infinitely cycled by Lusamine.

In addition to the wall tactics, stall decks take advantage of the abundance of support Pokemon like Dedenne-GX and Crobat V by using Snorlax to lock them in the Active Spot. Once an unbreakable board is built, whether it be by Pyroar, Altaria, or Snorlax, the stall deck then cycles Team Rocket's Handiwork to rapidly deplete the opponent’s deck, securing a victory.

In my opinion, stall is the absolute best deck in the current Expanded format, and it is not particularly close. It is the only deck that can be modified to beat any matchup in the format and, as a result, its only true barrier is the limit of 60 card in a deck. If any deck is meant to be good, it first must be capable of taking down Stall.

One of the best decks for taking down Stall is Arceus and Dialga and Palkia-GX / Dragonite V, which I covered a while back. Admittedly, many lists for ADP / Dragonite V are not heavily prepared for stall, often choosing “soft counters” like Vikavolt V to limit the opponent’s options, or AZ/Acerola, to counter the Block strategy. While these options do not auto-win the matchup, with some luck, they can swing the matchup in your favor. While people focus on soft counters, however, the deck can also incorporate Jolteon-GX or M Manectric-EX as a low-effort method to take down Pyroar while Tapu Koko Prism Star handles Altaria.

Another aggressive deck in Expanded is Volcarona V / Zebstrika, which is built to repeatedly deal massive amounts of damage for a low Energy investment. While this deck is powerful, it can certainly struggle with consistency in the early parts of the game, as one would expect for any deck playing 17+ Energy. One perk that Volcarona V does have access to is that, as long as you are consistently able to use Volcarona V’s attack, it is difficult to get completely walled out by stall in a way that would result in an outcome other than a tie.

In a similar vein to the Shadow Rider Calyrex VMAX deck’s Night Watch strategy, there is another deck that tries to pull off a similar strategy, but in a different way. In Shadow Rider Calyrex VMAX, Night Watch is incorporated into an unrelated strategy as a means of buying time. On the opposite side of this, there is Electrode-GX hand lock, which is going to be the focus of today’s article! 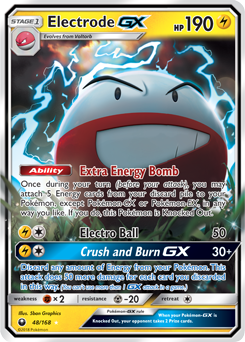 Ever since Milotic was banned, players have tried to replicate the old Trevenant and Dusknoir-GX / Milotic strategy, with many turning to Electrode-GX, which accelerates Energy in a similar manner. Unfortunately, Electrode-GX is unable to attach to Pokémon-GX, so we have to incorporate Bronzong into our strategy as a method of moving Energy from a non-Pokemon-GX (conveniently, this Pokemon is Bronzong!) to our attackers. In this deck, there is a multitude of attackers, but the two most important are Trevenant and Dusknoir-GX and Gardevoir and Sylveon-GX, both of which serve the purpose of completely removing the opponent’s hand as soon as possible, securing an easy path to victory.

Admittedly, when I first learned about this deck, I was a bit skeptical. Looking at it, it has a ton of moving parts that need to be hit in the proper order. However, after a friend mentioned that they liked the deck and threw me a list, I was immediately intrigued, as their list looked much better than some lists I had seen on the Pokémon TCG Online Versus Ladder. After looking into some lists that had seen some success in online tournaments, I started to develop my own list from the concepts I had seen.

Typically, lists focus on the versatility of the deck’s engine rather than on being consistent. I decided to change this, focusing on making sure I would turn two Magical Miracle GX or N + Night Watch with great consistency. Then, after I have my opponent locked down, I focused on getting through the rest of the game as effectively as possible, dealing as much damage as I could for minimal resource investment. As a result of this mentality, I ended up on the following deck list: