Hello PokeBeach readers! I am happy to be bringing you another article! Last time we talked quite a bit about Suicune V and its two main partners: Ludicolo and Inteleon. Since the release of that article, not much has changed for the Suicune V archetypes, but their results and popularity seem to be improving. In the online event scene, Suicune V / Ludicolo has finally grabbed the position of being the fifth most played deck after a steady climb in popularity over the last few weeks, easily cementing itself as an even bigger threat than before. Another deck that has been gaining a ton of popularity recently is Houndoom / Umbreon VMAX / Single Strike Urshifu VMAX (or more simply, Single Strike Box). Single Strike Box has not been a huge part of the metagame for very long, but since it first started picking up some traction in early September, the momentum has not stopped and it has climbed all the way up to being the third most popular deck in Standard within online events. Of course, this popularity surge would not be possible if it was not for the work of former PokeBeach writer and two time North America International Champion, Stéphane Ivanoff, who used the deck to win an event with more than 500 people (and was organized by yours truly!).

Interestingly enough, the rise of Single Strike Box is not the only deck that Stéphane has directly caused to surge in popularity over the last month. In the far smaller Expanded scene, Stéphane has caused a huge surge in popularity of not one, but two different variants of Dragonite V, and those decks will be the topic of today’s article! First, however, we must take a look into one of the cards that has been a powerhouse of the Expanded format over the past roughly two years, shaping the Expanded format to its will in the process, Double Dragon Energy.

Expanded and the Double Dragon Problem 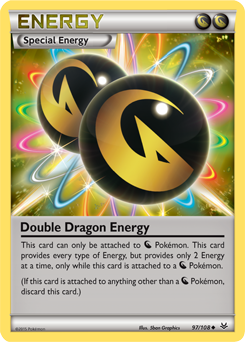 Throughout the history of the Expanded, many cards have caused controversy. From Hex Maniac to Shaymin-EX, card after card has been dealt with, whether it be by ban, community dismissal of the debate, or power creep. However, one card has been a topic of debate for quite some time, and even now, it still has yet to be dealt with, and that card is Double Dragon Energy.

To this day, I still do not understand why this card was seen a good card to print. The absurdity of its power was clear upon release, and it has only gotten better as more and more Dragon-type Pokemon have been released. From Giratina-EX to Salamence-EX and from Garchomp and Giratina-GX to Arceus and Dialga and Palkia-GX, Double Dragon Energy has been absurdly powerful the whole way. Especially within Unified Minds and Cosmic Eclipse, the power of Double Dragon Energy in Expanded has grown tenfold and it continues to be one of the most powerful cards in the format. With the Sword & Shield block, it appeared to be sunset for Dragon-type Pokemon, but then with the recent Evolving Skies expansion, a new pool of extremely powerful Dragon-type Pokemon was released, and with it, Double Dragon Energy has come surging into Expanded even stronger than before.

With this new pool of Dragon-type Pokemon, two have made a larger impact than others. The first of these is Regidrago, which has made a name for itself as a Single Prize Pokemon with incredible damage potential. The other new Dragon-type Pokemon is Dragonite V, which I mentioned earlier as a powerful new threat with two different builds. These variants, one built around going turbo with just Dragonite V and one that includes Arceus and Dialga and Palkia-GX, have started the take Expanded by storm, so it is only fitting that we talk about them today, especially with some good sized Expanded online events on the horizon. Without further ado, how about we take a look at the first variant of this deck, Turbo Dragonite V.

Reminiscent of the Roxie / Garchomp and Giratina-GX that took down the 2020 Dallas Regional Championship, the Turbo Dragonite V deck is built to consistently swing with Dragon Gale as soon as your first turn, assuming you are going second. Stéphane first suggested this deck shortly after the release of Evolving Skies, and since then, it has done quite well for itself in the Expanded format. Stéphane’s build, which used old Roxie / Giratina and Garchomp-GX lists from before as inspiration, is built to be extremely consistent at pulling off the turn one Dragon Gale thanks to Tapu Koko Prism Star and plenty of forms of draw cards and digging Trainers in order to find the pieces needed to pull together this powerful combo.