Hey everyone, Caleb here with an in-depth look at an interesting new card from the upcoming Rebel Clash set and its possible impact on an older archetype! Galarian Weezing breathes new hope into Beheeyem, a hyped-up card that never really panned out. Beheeyem’s last real 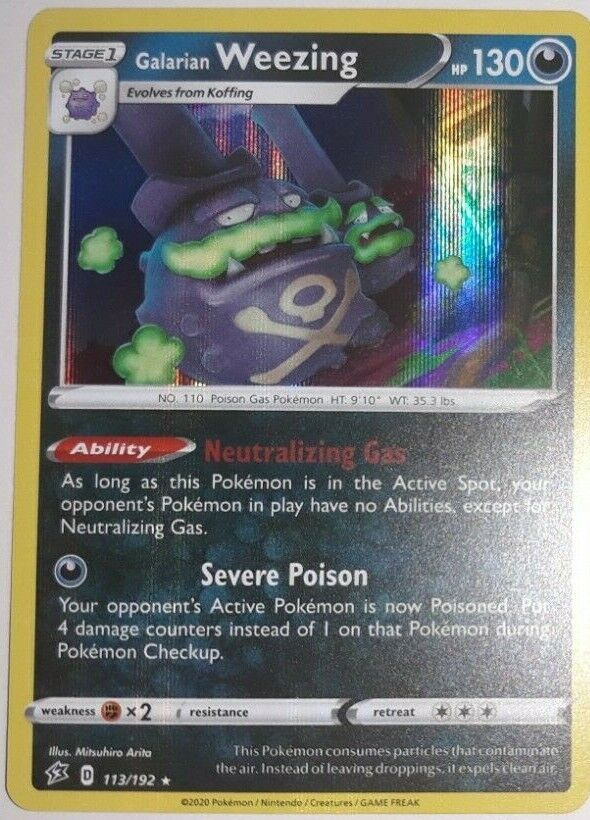 time in the spotlight was at this past season’s World Championships, where Hampus Eriksson took it through Day-1 undefeated, but faltered in Day-2. I hadn’t thought about Beheeyem again after that until I saw Galarian Weezing.

Neutralizing Gas is a powerful Ability, especially in a Standard format where a variety of different Abilities are potent. First of all, let’s look at some of those Abilities:

A variety of decks rely on establishing a Bench full of Cinccino for their draw support. If you shut off Make Do, you can prevent those decks from repeatedly drawing the combinations of cards they need to execute their strategy each turn.

Dedenne-GX is often a good card to see if you’re playing against Beheeyem, because it can dump your hand of useless Items, but if Galarian Weezing is in the Active Spot, Dedechange cannot be used.

Wobbuffet is often played in decks that are worried about opposing Prism Star cards, but Galarian Weezing can turn off the Abilities of these two, meaning your Beheeyem deck wouldn’t need to run Wobbuffet.

One of the most-hyped cards from Rebel Clash, Eldegoss V has a very powerful Ability, and shutting it off can significantly reduce the options your opponent has available in the late game.

Another Rebel Clash card, Garbodor has seen some hype since its Ability can instantly Poison the Defending Pokemon. If Garbodor ends up being crucial to the strategy of a new deck, Galarian Weezing will give you a significant edge against that deck.

A lot of decks in the current Standard format rely on Jirachi to set up as well as to maintain consistency throughout the game, so turning off Stellar Wish would be immensely powerful in this format.

Without access to Psychic Recharge, Malamar players are basically piloting a theme deck.

The Mewtwo and Mew-GX Toolbox archetype relies almost entirely on being to use the Perfection Ability, so you can cripple this deck by shutting that off.

I could go on, but this list should make it crystal clear that Galarian Weezing is going to be obnoxious for many, if not all, decks in Standard to deal with. I think that the current Standard format is not prepared to deal with the combination of Ability lock from Galarian Weezing and Item lock from Beheeyem. This combination will be highly frustrating to opponents, and if this deck attains popularity, it may change the way decks are built (like Garbodor did when it was first released). Some historical analogies to this style of deck are Seismitoad-EX / Garbodor and Accelgor / Wobbuffet, both of which were quite successful in their respective formats.

In the rest of this article I’ll provide my first-draft Beheeyem / Galarian Weezing list and offer some insights into the card choices I went with, focusing on ways to build around the Galarian Weezing strategy as well as tech cards I considered for expected matchups in Rebel Clash Standard.