Are you tired of the current Standard format? Vikavolt / Rayquaza-GX and Buzzwole / Shrine of Punishment don’t excite you anymore? Then I have good news for you! In many different ways, Lost Thunder is going to completely change the metagame. New archetypes like Blacephalon-GX / Naganadel and Lost March will appear, Professor Elm’s Lecture will give decks like Zoroark-GX a much needed boost, and even stall decks could reinvent themselves with Shuckle-GX. However, the card that I believe has the most potential to change things up, which happens to be my favorite card of the set, is Alolan Ninetales-GX.

Here’s the short version: Alolan Ninetales-GX has an Ability that boosts consistency, an efficient attack, and a situational but potentially amazing GX attack. You know what other cards can be described this way? Tapu Lele-GX and Zoroark-GX — cards that are generally considered to be pretty good.

As for the long version? That’s the rest of this article. That’s right, Alolan Ninetales-GX has so much potential that a whole article is needed to describe it. It improves existing archetypes, it brings back forgotten decks, and it makes many Pokemon much more viable. I’ll talk about many of Ninetales’ potential partners and give deck lists for each of them, both based on my analysis of many Japanese deck lists. But first, let me explain why this card is so good.

Why Mr. Fox is So Good

Although it’s unfair to reduce a card to just one of its components, the most important part of Alolan Ninetales-GX is its Ability. Items can be key components in many decks, but there are few ways to search them out. Currently, decks that need Rare Candy to function, like Magnezone, are playing Volkner despite not playing Lightning Energy. Sometimes, they play one Lightning Energy despite not having any specific use for it just because they can get it with Volkner. That’s how important getting Rare Candy is.

For such decks, Ninetales is a godsend: it’s a simple Stage 1 that can find two Items! So, at the minimum, you can find Rare Candy and Ultra Ball or Timer Ball to evolve into a Stage 2 Pokemon as soon as turn two. With a good hand, you can get two Rare Candy in order to get two Stage 2 Pokemon in play. And that doesn’t even use your Supporter for the turn!

Something else that might be obvious is that Ninetales evolves from Alolan Vulpix, a card that was already featured in some Stage 2 decks like Metagross-GX. It was hard to justify running more than one, but now that it has a relevant Evolution, it’s reasonable to play three, which increases your odds of a turn one Beacon.

These two points combined mean that Alolan Ninetales-GX is an excellent partner for all sorts of Stage 2 decks, and single-handedly makes them more viable. As an example, let’s take Garchomp, a deck that always had issues with consistency. Since it generally plays Alolan Vulpix already, it’s not hard to add Alolan Ninetales-GX to the deck. Here’s a list that won a Gym Battle (the Japanese equivalent of a League Cup): 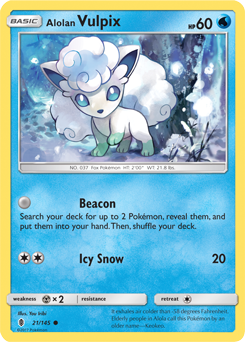 Disclaimer: I don’t think this deck list is optimal. There are a number of cards that I would change, such as adding a second Lucario and Alolan Ninetales-GX; and cards that I don’t see the point of, like Acerola and Lusamine.

Still, you can see the synergy between the cards. Gible, Alolan Vulpix and Riolu can all be searched with Brooklet Hill. Alolan Ninetales-GX can find the coveted Rare Candy, but you can also use it to find both Custom Catcher! This means that in the mid game, Alolan Ninetales-GX can play the same role as Lycanroc-GX by bringing up a Pokemon from the Bench without using a Supporter, so you can still play Cynthia on the same turn.

This is where we start to see another great aspect of Alolan Ninetales-GX: its versatility. Thanks to the fairy fox, it’s now easier to play one-of Items and search them out at the right time, something that was previously only popular in Expanded Fighting-type decks thanks to Korrina. Examples include Custom Catcher (not a one-of, but something that you might need to search out at one specific time), Field Blower, Enhanced Hammer, Counter Catcher, Max Potion, Switch, and Counter Gain. That last card is a way to power up Ninetales in one turn in order to attack with it, provided you have an Energy. (Japanese players have access to Energy Spinner in order to find the Fairy Energy; we will have to make do with Energy Loto.)

Some deck lists even include Looker and Looker Whistle so they can use Ninetales to grab a Supporter if needed. Although this seems a bit far-fetched, the fact that Ninetales can even turn into draw power is one more reason why it’s such a versatile card that rewards creative deck builders.

So, to summarise, Alolan Ninetales-GX gives Stage 2 decks a much needed consistency boost and even allows them to play tech cards, something they couldn’t afford before. To me, that’s enough to make it the coolest card in the set. But it’s not just cool, it’s also competitive! The rest of this article is dedicated to Pokemon that have a real shot in the metagame thanks to Ninetales.