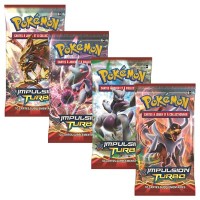 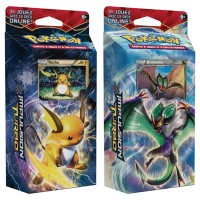 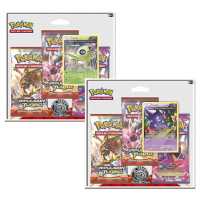 The French booster packs, blister packs, and theme decks for BREAKthrough have been revealed! Thanks goes to Pierre for the heads-up on this story.

The booster packs confirm what we suspected: M Houndoom-EX will be in the Japanese XY8 set.

The Raichu and Noivern from the theme decks come from the Japanese set’s accompanying Raichu BREAK and Noivern BREAK decks.

The blister packs feature the Celebi promo you could get for purchasing two booster boxes of Bandit Ring and the Sableye promo from CoroCoro magazine.

Θ Stop: Prevent all effects of your opponent’s Pokemon’s Abilities done to this Pokemon.

Ability: Time Skip
When this Pokemon is Knocked Out, flip a coin. If heads, your opponent does not take a Prize card and shuffle this Pokemon and all cards attached to it into your deck.

[G] Sparkle Mine: Place 1 damage counter on each of your opponent’s Pokemon.

Θ Stop: Prevent all effects of your opponent’s Pokemon’s Abilities done to this Pokemon.

[P] Energy Hunt: Flip 3 coins. For each heads, search your discard pile for a basic Energy card and attach it to 1 of your Benched Pokemon-EX.

Weakness: none
Resistance: none
Retreat: 2