With the release of XY8 BREAKthrough will come a bounty of TCG products, some of which we’ve reported about here and on our Twitter in recent months, some of which we’re hearing about for the first time today. This post will collect all of them together for everyone’s convenience! :) 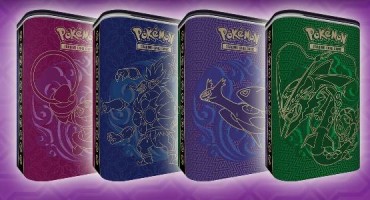 These tins are meant to hold your decks and will be released on October 21st. Unlike previous deck shield tins, they will come with 45 Energy cards (5 of each type), allowing players to gain easy access to them. They will also come with two booster packs. Although they are now coming with Energy cards, they will still retail for the same price as before: $12.99 each. (Thanks goes to @AutobotTesla for the image!)

We’ll be getting Mega Mewtwo X and Mega Mewtwo Y as figures! These will be released on November 18th, so they’re obviously meant to be under the tree for Christmas. We do not have a product image yet.

The two versions of the Mega Mewtwo Collection put the Legendary Genetic Pokémon right in your hands, with a stunning sculpted figure of Mega Mewtwo X or Mega Mewtwo Y and a never-before-seen foil card featuring Mewtwo! Get ready for Pokémon adventures with Mega Mewtwo today!

We don’t have images of this product yet and just learned of it today. But like previous sets, it will include three booster packs from the set it’s promoting (BREAKthrough) and a pin of either Mega Mewtwo X or Mega Mewtwo Y.

We reported about these a while ago and posted the images to our Twitter. Each tin comes with promo reprints of Hoopa-EX, Rayquaza-EX, or Latios-EX as well as four packs and a PTCGO code card. They will be released October 7th.

As reported a few week ago, on November 18th we’ll be getting a new BREAKthrough Collector’s Chest Tin akin to the Hoenn Chest Tin. Each tin will come with five booster packs, three holo cards featuring Hoopa, Pikachu and Chespin, a coin, two sticker sheets, a mini album, a notepad, four pencils, and a TCGO code card. The tin will be a “sturdy metal case.”

As we reported previously, a Mega Blaziken-EX Box and Mega Swampert-EX Box will be released in America on November 4th. Each box will come with either holo promos of Blaziken-EX and M Blaziken-EX or Swampert-EX and M Swampert-EX, a coin and playmat featuring the titular Mega Evolution, eight booster packs, and a TCGO card. We do not have a product image yet.

The Legendary Collection Box will be released in America on November 18th. Each box will feature either Pikachu-EX or Hoopa-EX, a pin of one of the Pokemon, five Legendary Pokemon as full art cards, five booster packs, and one PTCGO card.

As we stated in the last news story, it’s possible the booster packs will contain the rest of the cards from Japan’s Legendary Holo Collection mini-set, though the product description does not make out the packs to be anything special. We’ll find out when the product is released.

The two Pokémon TCG: Legendary Collections bring you the beloved Pikachu or the mischievous Hoopa as a powerful new Pokémon-EX, plus five different full-art Legendary Pokémon. These collections deliver some of the most famous characters from throughout the Pokémon world!

We also reported about these a while ago. Each box comes with two 60-card decks, two metallic coins, two sets of damage counters, two deck boxes, a PTCGO code card, and a quick play guide. The whole package will cost $29.99 and hit store shelves October 21st.

Each deck comes with:

The set will also come with the usual Elite Trainer Box (description below), a 60-card mini-binder that includes a booster pack, a launch kit, theme decks, and promo blister packs.

Discover a new path to power that builds on a Pokémon’s existing strengths and creates all-new battling options! One world of technology, one world of nature, and all the wonders of these twin worlds are yours to explore in the Pokémon TCG: XY-BREAKthrough expansion!