Update #2 (11:15 PM) – N has been translated below thanks to kirbypopstarhero – it’s a reprint of Rocket’s Admin. | Update (11:00 PM) – None of our translators are on, so I personally translated the spoilers below! Archeops’s Ability has the same name as Fossil Aerodactyl’s old Pokemon Power – “Prehistoric Power.” :p

Six new cards from Red Collection have surfaced through three different sources – N, Archeops, Beheeyem, and Landorus were just revealed through the Pokemon Card website, Gigalith was shown in the latest issue of Dengeki DS magazine, and we have a text spoiler of Stunfisk from CoroCoro Ichiban magazine (we don’t have its scan yet). Thanks goes to Viper.Fox for providing the magazine scan of Gigalith! Landorus is exactly the same as the promo you get when you buy a booster box of Red Collection, spare the artwork. 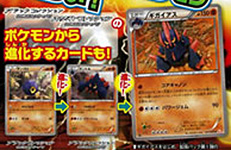 Each player shuffles his or her hand into his or her deck and draws a number of cards equal to the number of his or her remaining prize cards.

You can only use 1 Support card during your turn.

Ability: Prehistoric Power
(The text is unreadable, but it probably is similar to Fossil Aerodactyl’s: “No more Evolution cards can be played. This power stops working if Aerodactyl is Asleep, Confused, or Paralyzed.”)

[F] Core Cannon: Choose one of your opponent’s Pokemon. This attack does 20 damage times the number of Fighting Energy attached to this Pokemon to the opponent’s Pokemon. (Don’t apply Weakness and Resistance for Benched Pokemon.)
[F][C][C][C] Power Gem: 90 damage.