Be sure to look at the previous update.

New Diamond and Pearl Pokemon – An upcoming issue of the Pokemon magazine, Pokemon Wonderland, contains two new (maybe even more) Pokemon on the front cover of its magazine. These Pokemon are too freaky-looking to be Pokemon you would find in the wild, so perhaps they are the Kyogre and Groudon of Diamond and Pearl. They have the same color schemes as the Diamond and Pearl logos, and they appear to have jewels on both of them (maybe a… diamond and pearl?) Pretty interesting! There also appears to be at least one new Pokemon on the top-center of the magazine that is purple, next to what looks like a mini-Plusle, next to what looks like a Minun, which is then next to a Buoysel. 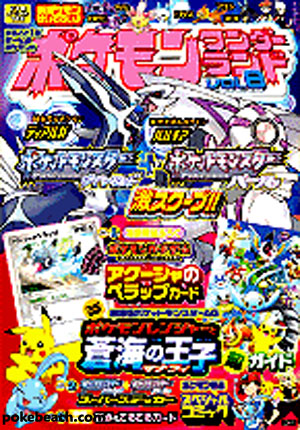 Ash Catches a… – In the recent episode in Japan, Ash caught an Aipom. Why would he catch a Gold and Silver Pokemon so late in the series, when they are going to move on to the Diamond and Pearl region soon? Methinks Aipom is going to have an evolution in Diamond and Pearl, which would make sense considering it’s a basic and could use an upgrade in the games.