Lots of news today. There has got to be an easier way to organize all of this. Oh yeah, incase I have not yet shoved this down your throats enough, [sign up] and post on our new forums! Also, if you missed yesterday’s news, which included Holon Phantom scans, scroll down and take a look! 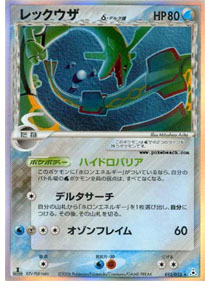 All Holon Phantom Translations – Bangiras has kindly translated for us ALL of the cards out of the Holon Phantom expansion. She is the one who translated Eidolon Forest for us as well, and her translations are top-notch! The Holon Phantom is turning out to be an excellent set, and will definitely change the format around. With this releasing of the set, it would appear as if we now know what will be the format for Worlds 2006. Holon Phantom will most likely be the last set of this season to be released in May, followed by Miracle Crystal in August (after Worlds, of course). So, the sets for Worlds will most likely be EX Hidden Legends through Holon Phantom. We can all start practicing now! Anyways, to read all of the spoilers for the set, you can [click here], or in the future, select “Holon Phantom Spoilers” under “Japanese TCG Sets” in the left menu. If you came here earlier today and viewed Vincent’s spoilers of some of the evolved Pokemon from the set, you may have to clear out your cache to view these spoilers.

Gorebyss Image from Legend Maker – [Pokemon.no], the official Pokemon Norwegian site, has posted another picture of a card from EX Legend Maker – this time being Gorebyss! You can see a larger image of the card by clicking its thumbnail on the left. Also, regarding the errors on that Banette ex the other day – Mike Liesik, head of POP, stated that he has seen a real printout of the card and it does not have the same errors on it as the Banette ex image. Thus, the image from Pokemon.no was just an earlier version of the card that had not been corrected yet. “OMG THE CARD’S NOT HOLO!!!” This card is not supposed to be a holo, but I will explain why cards like Banette ex are not holo to clear up some confusion I have seen. These are the images that PUSA prints out from their computers on to holographic paper. They don’t make the background of the Pokemon holo on the computer, and just expect the ink to make it look holographic. They print the images over the holo paper, with the card’s parts, such as the attack text, background template, etc. cover the holo, and the rest of the empty space on the card (such as the background behind the Pokemon) be empty, thus allowing the holo to show through. If you have ever peeled a Pokemon card before, you will see that the whole card is actually holo, and that the ink is what covers up many of the parts. Hope this explanation was clear.

New Diamond / Pearl Pokemon to be Revealed – CoroCoro revealed today that in its next month’s issue, a new Diamond and Pearl generation Pokemon will be revealed. This will be the first D/P Pokemon revealed since last March (almost a year ago), and the new Pokemon will be featured in the 9th Pokemon movie, Pokemon Ranger and the Prince of the Sea. We luckily have some correspondents who receive CoroCoro earlier than most people, so when the new Pokemon is revealed, we will try to get it up as soon as possible! Hopefully it will be a Water-type.

So Those Guys are STILL Saying Pokemon is Dead? – Well let’s just smack them so silly that they wet their pants. 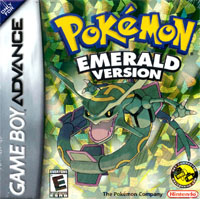 Not only was the Anime the #1 rated show on Saturday mornings for Kids’ WB, but now Emerald has shown the popularity of the Pokemon games in the United States. Ruby and Sapphire were #1 in 2003, and now it’s predecessor, a REMAKE, is #2. Pokemon certainly is thriving. Now all we need are some statistics on the trading card game.