Update #whatever: I have put together a page for all of Vincent’s Holon Phantom translations and have edited the translations to be more clear. The page can be accessed by [clicking here], and will be in the left menu under “Japanese TCG Sets” in the future when I have time to edit the Holon Phantom and Miracle Crystal set page (hopefully today). 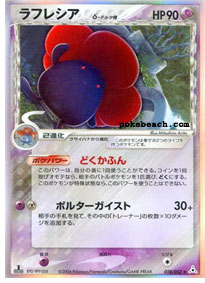 Exclusive Holon Phantom Scans
We have obtained several exclusive Holon Phantom scans from two Japanese correspondents in Japan who attended the World Hobby Fair, as well as another commercial source. The scans reveal to us that the Pokemon in this set will have even more unusual types than the last set, and give us the general idea that there will be fossil Pokemon in the set – again. As with yesterday’s images, these scans confirm information we have had since early December on the set, such as there being a Water/Metal Rayquaza. More scans will be uploaded here as we receive them, so keep coming back during the day to check for any new updates. Vincent will hopefully translate the cards for us later on today.

Commentary: (1) Wow, only 52 cards. What a small set. As in EX Delta Species / Researching Tower, the cards have that reverse holo effect on them. (2) It would seem as if the Castform are the Holon’s Electrode/Magneton of this set. (3) Holon Rainbow Energy? Wonder what it does. It probably provides three Rainbow Energy when a certain condition is met. And those two trainers look interesting. The egg probably is some sort of Mysterious Fossil, and the trainer with the guy in it is probably some Holon Trainer card similar to the Holon Trainers of Delta Species. I will update the Holon Phantom page later with all of the information we have discovered over the past few days. Be sure to post on our forums about the set, as we are your home base for this set, and to check back later today for some translations and possibly more scans! The topic for this set is located [in this thread], where people are already discussing the set. This is the perfect time to join our forums if you haven’t already done so!

UPDATE: Vincent has translated many of the evolved Pokemon from the scans above. The translations can be read [in this forum topic]. The Rayquaza will fit awesomely into any Blastoise/Lugia deck, and that Pidgeot would be perfect for any Delta Species-only deck! These Delta Species Pokemon sure are interesting!

Mew and the Wave Guiding Hero – OST
We continue our Mew movie marathon with yet another OST. Today’s song is titled “Regirock” and plays many times throughout the movie in many different variations, such as when Lucario is first introduced and of course when Regirock appears. To download the song, save the link, or click the link and wait for your browser to prompt you for the download.