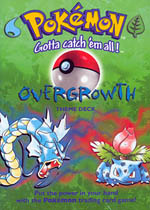 Theme decks are 60-card pre-constructed decks sold alongside the release of a Pokémon TCG set, packaged commonly with a holographic card, a coin, a rulebook, and playing materials. They are mainly comprised of cards from the sets they are affiliated with and contain multiple copies of the same cards with up to 30 Energy. Two theme decks are usually issued with each set, though up to five have been released with certain sets before.

Each pre-constructed deck is designed after certain elemental types, such as Water and Grass-type Pokémon, and sometimes secondary themes related to the parent sets, such as Gym Leaders or Starter Pokémon. Theme decks often focus on two evolutionary lines, with the highest stages of evolution featured on the packaging.

The primary purpose of purchasing theme decks is to learn how to play and practice the card game using pre-assembled decks. However, the decks are not meant for competitive play and never involve advanced strategies. For advanced players, theme decks occasionally contain a few powerful cards needed in competitive decks that may be difficult to obtain out of booster packs. For collectors, the decks are packaged with special coins and sometimes contain exclusive holo and non-holo versions of cards that cannot be found anywhere else.