Both decks were the first to not feature a specific holographic Pokémon card. Instead of the usual rare holo and rare included in previous theme decks, they now contain three rares and one reverse holo card, a trend that continued until Skyridge. The reverse holo is a random bonus card, so each deck comes with 61 cards instead of the normal 60.

The decks were also the first to feature “theme deck variants,” or cards that are of different rarities than their original set appearances. Charizard, Dark Raichu, and Dark Blastoise are printed in the theme decks as non-holos when their set numbers mark them as the original holographic cards. This did not occur again until EX Ruby and Sapphire‘s theme decks when Nintendo took over the TCG.

“Lava” primarily focuses on Fire and Fighting-type Pokémon and features a non-holo Charizard theme deck variant card. It contains one random reverse-holographic card from Legendary Collection for a total of 61 cards. For more information on this deck, jump to the top of this page.

“Turmoil” primarily focuses on Lightning and Water-type Pokémon and features both a non-holographic Dark Raichu and Dark Blastoise theme deck variant card. It contains one random reverse-holographic card from Legendary Collection for a total of 61 cards. For more information on this deck, jump to the top of this page.

“Lava” and “Turmoil” both come with a metal, silver Pikachu coin. The coin was included in all E-series theme decks as well, and thus was not exclusive to the two theme decks above. 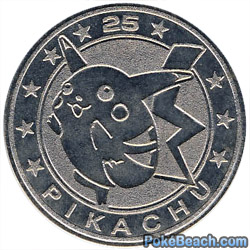