Blackout, Brushfire, Overgrowth, and Zap! are four Base Set theme decks. Each 60-card pre-constructed deck comes packaged with a holographic Chansey coin, a Base Set card checklist, a (then-current) Pokémon TCG rule book, and several glass damage counters. They were originally released in stores with Base Set on January 9th, 1999 for $9.99 each, but are now long out of print.

A month before Base Set and its theme decks were sold in stores, Wizards of the Coast released a special 2-Player Starter Set. Its purpose was to introduce players to the Pokémon TCG by teaching them how to play it.

This “2-Player Starter Set” contains two 30-card mini-decks that two players can use to battle each to learn how to play the TCG. As it was available in stores a month before Base Set was released in stores, it was the first commercially available TCG product in America and thus the first way to buy English Pokémon cards.

The package features a semi-exclusive 1st edition Base Set Machamp card. As the 2-Player Starter Kit’s first print run was released before Base Set, all of its cards were 1st edition; in later print runs, only Machamp carried the 1st edition stamp. Later in Base Set 2‘s 2-Player CD-Rom Starter Set, another 1st edition Base Set Machamp card was released, but with a noticeably different galaxy holofoil pattern. Thus, a collector may consider each to be unique cards if going by their holofoil. Machamp cannot be obtained out of any booster packs of Base Set, making the card semi-exclusive to the two aforementioned decks. An official unlimited version of Base Set Machamp was never released, though a demo deck given out to prototype Pokémon Leagues before the card game officially launched in America contained a demo Machamp card lacking a 1st edition stamp. Machamp was later reprinted in Legendary Collection as an unlimited card.

The package does not contain a Chansey coin like the regular Base Set theme decks, as it was probably made after this was first released. However, it does feature a starter game guide, which discusses how to play the card game using the two included mini-decks. Combined, the 30-card decks primarily focus on Fighting and Fire-type Pokémon. For more information on this product, jump to the top of this page.

“Blackout” features a holographic Hitmonchan card and primarily focuses on Fighting and Water-type Pokémon. For more information on this deck, jump to the top of this page.

“Brushfire” features a holographic Ninetales card and primarily focuses on Fire and Grass-type Pokémon. For more information on this deck, jump to the top of this page.

“Overgrowth” features a holographic Gyarados card and primarily focuses on Water and Grass-type Pokémon. For more information on this deck, jump to the top of this page.

“Zap!” features a holographic Mewtwo card and primarily focuses on Lightning and Psychic-type Pokémon. For more information on this deck, jump to the top of this page.

“Blackout,” “Brushfire,” “Overgrowth,” and “Zap!” each come with a silver, holographic Chansey coin that cannot be found in any other Pokémon TCG product. The “2-Player Starter Set” does not come with one. 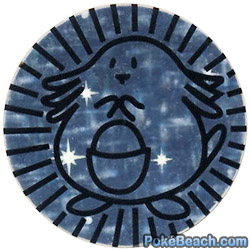