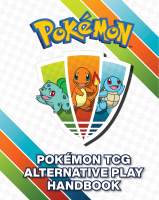 The Pokemon Company International recently released its Alternative Play Handbook, which details a number of alternative ways to play with cards from the Pokemon Trading Card Game. If you’ve ever gone to large events like regional or international championships and played in any of the side events there, you may be familiar with a few of the alternative play options detailed in the new handbook. Among the formats described in the new handbook are beginner formats like Poké Catch, intermediate formats like Pack Battles, and the real highlights of the documents for more experienced players: the advanced formats including a new 2v2 Team format and a brand-new Raid format.

To be clear: these are not official formats for sanctioned tournament play. These are for-fun ways to play with Pokemon cards that break away from the norm. Below is the list of all of the formats the document covers:

My personal favorite of the formats detailed in the new handbook is the Raid format—a more skill-based way of imitating the raid battles introduced in Pokémon Sword and Pokémon Shield than the ‘Raid Battles’ introduced in the past. In these new raid battles, players work together to take down a raid boss, typically represented by a jumbo card. I got a chance to play a few raid battles at NAIC this year. My very first raid boss was the rather formidable Tapu Koko-GX.

Most players will take one look at Tapu Koko-GX and think, “It has barely any HP. How could it possibly be much of a threat?” The answer is this: you’re not trying to knock out the raid boss based on its HP. Instead, players work to take the raid boss down by attacking into it and by so doing lost zoning the raid boss’s deck. Let me explain, starting with the basics of how to play.

In the raid format, each player sets up play as usual, drawing their hand of 7 cards, setting their prizes, etc. Unlike in Standard play, there is no coin flip to determine who goes first: the players always go first. From there, players simultaneously take their turns in preparation to attack the raid boss. During their first turn, players may evolve Pokémon (as if Broken Time-Space were in play, though only for the first turn) and players may also play Supporter cards and can attack.

The raid boss has no starting hand and does not set up any prize cards. If players have to take a mulligan during setup, the boss does not draw any additional cards.

Speaking of Supporter cards—they work slightly different to how you’d expect. Suppose you’re in a raid with three other players. Because a total of four players are in the raid against the boss, up to 4 Supporter cards may be played between you. This means, for example, that if you needed, you could play three Supporter cards in the same turn, but it would leave your allies with just 1 Supporter card left between them! Making things even more interesting is the next change to Supporter cards: you can play them for your allies.

As players complete their turns, the damage the players deal is totaled up. Then, the raid boss’s turn begins.

At the start of the raid boss’s turn, it draws a card, plus 1 card for each player in the raid. (In a four-player raid, the boss would draw 5 cards at the start of its turn.) Now here’s where the raid boss can get a bit daunting: the raid boss always resolves each card it draws. If a raid boss draws 5 Supporter cards, it resolves the effects of each of those Supporter cards, one at a time. Any Energy that it “puts into its hand” is immediately attached to itself, and any tool cards and Stadium cards that it draws into replace whatever is currently in play. All Energy attached to the raid boss are treated as basic Rainbow Energy—they always provide every energy type at once.

Once the raid boss has finished resolving the effects of the cards it has drawn, it attacks, choosing one of the attacks it has energy for at random and discards an Energy for each Energy in the attack cost.

This brings us back to Tapu Koko-GX. It has just two attacks, one of which is its GX attack, Tapu Thunder-GX. As you’ve probably guessed by now, the raid boss can use its GX attack over and over and over again, provided it has the energy and that GX attack is randomly selected. The same is true for VSTAR Power attacks. In my first raid against Tapu Koko-GX, it wiped out every Active Pokémon in play with its GX attack. When a player’s Pokémon is Knocked Out, the players draw the Prize cards their opponent would normally draw. If a player had an active Ice Rider Calyrex VMAX that was Knocked Out, it would be discarded, and that player would take three of their own Prize cards for that knockout. Once a player runs out of Prize cards, they are out of the game. If all players are out, the raid boss wins.

Then, the players start their next turn.

I’ve covered the basics of the raid format. It’s really quite fun to play and I hope many people pick it up and give it a shot at their local league with friends or at home with their families. In the Alternative Play Handbook on the Play! Pokémon Rules & Resources page, an example Raid Boss Deck is provided, so you can build the raid boss’s deck and then put all of your unused jumbo cards to use as raid bosses.

Member
I’m so happy GLC is being recognized. It has potential to overtake expanded

Like most card games, it's pretty confusing when explained through paragraphs of text, but in person you get the hang of it pretty quickly! It's a fun alternative format especially in casual settings
Z

Member
They HAVE to add the Raid Format to PTCGL if they wanna get it to be popular. It looks so fun and is the kinda thing that PTCGO needs right now.

Member
Pokémon better put some respect on Mahone's name, GLC is singlehandedly what keeps me in the game lately.

Advanced Member
Member
GLC being recognized is the best thing that's happened to pokemon in a long time. Mahone gets the credit, but its really the community that made it come to life. Good job team!

EDIT: ● Each player’s deck must contain only Pokémon without a Rule Box - YESSSS
Last edited: Jul 30, 2022

Member
What is Mahone?? A new Pokémon from Scarlet/Violet?
Z

bbb888 said:
What is Mahone?? A new Pokémon from Scarlet/Violet?
Click to expand...

Fr? Andrew Mahone, aka TrickyGym on youtube, us one of the most popular PTCGO and competitive TCG youtubers and he created the Gym Leader's Challenge format, one of the most successful and beloved fan-mage formats.

ZestyGan said:
They HAVE to add the Raid Format to PTCGL if they wanna get it to be popular. It looks so fun and is the kinda thing that PTCGO needs right now.
Click to expand...

Yeah, it looks awesome and a nice new way to play
R

Member
Just tried a couple games of Raid. Seems like a really cool concept, but doesn’t really feel like the ‘normal’ players have a chance. Boss gets unlimited supporters and attachments, right?

Member
Mahone must be losing his mind over TPCi acknowledging GLC like this.

Red-EyesHydreigon said:
Just tried a couple games of Raid. Seems like a really cool concept, but doesn’t really feel like the ‘normal’ players have a chance. Boss gets unlimited supporters and attachments, right?
Click to expand...

Most of the time the players should win raid format in my experience. The key is to balance what’s in the raid deck - if you’re not able to beat it regularly with meta decks then make the raid deck easier.

Raid is a great format for league as newer players can play it alongside better players and have fun winning. It’s not meant to be super difficult.

dmein89 said:
I’m so happy GLC is being recognized. It has potential to overtake expanded
Click to expand...

Well it's not an official format so it couldn't take over expanded even if it wanted to.

Member
This is honestly the best thing to happen to the game in years imo. My youngest brother really likes the cards but doesn't have a grasp on math involving larger numbers yet, so the beginner formats are perfect for him. The advanced formats, especially 2v2, are great for the rest of the family since the Standard format has become extremely boring and stale for us lately.

Advanced Member
Member
We have been playing Raid format at our local store for a few weeks now. Its very exciting to see the players working together to take out the Boss. Plus it gives us something to do with those old oversized cards besides collecting.

Member
This is a very good move with Standard being Standard and Expanded being as unpopular as it generally is. TPCi cannot control the Japan side, but they can encourage people to try healthier formats.

GLC looks like a fun way of playing single-prizers but limiting Expanded's power through a singleton format. It's probably the best way to play single-prizers, since Standard has a very weird selection of cards. I think I'll try it out.
C

Member
This Raid format looks perfect for playing with my kids! The suggested cards are also super cheap so it's an easy boss deck to set up.

Does anyone have any more information than was presented in the PDF about example raid boss decks and the like? Everything I found searching was about the Raid Battle thing that looks very different from what is presented here.

Either way, I'm looking forward to trying a cooperative format and this looks amazing

cruithear said:
This Raid format looks perfect for playing with my kids! The suggested cards are also super cheap so it's an easy boss deck to set up.

Does anyone have any more information than was presented in the PDF about example raid boss decks and the like? Everything I found searching was about the Raid Battle thing that looks very different from what is presented here.

Either way, I'm looking forward to trying a cooperative format and this looks amazing
Click to expand...

There are two different "Raid Battles" that Pokémon has presented, and the one in the PDF and this article is the newer one that's actually good. The other one debuted over a year ago and was awful. That's unfortunately what you're probably seeing when you're trying to search for more about this one. If you have specific questions about how to play Raid format, fire away!
You must log in or register to reply here.
Share:
Facebook Twitter Reddit Pinterest Tumblr WhatsApp Email Share Link