Hello PokeBeach readers! Isaiah here, and I am happy to be bringing you all yet another article! Last time, I talked about the power of the new Miltank from Astral Radiance, which remains one of the most underrated cards in Standard, and its applications in the Blissey V archetype. That article released shortly after the North America International Championship, but unfortunately I omitted an excellent deck that used Miltank to resounding success there: the Mewtwo V-UNION stall deck. Created by 2015 World Championship Finalist Mees Brenninkmeijer and one of the game’s greatest stall/control pilots, Sander Wojcik, Mewtwo V-UNION Stall made a huge splash at NAIC, finishing third in Sander’s hands as well as 72nd in Mees’s.

Seeing this deck explode at NAIC mesmerized many players, myself included. Several people that I know gave the deck a shot and dismissed it after seeing little success with it, but I think they may not have given the deck enough time. As I have played the deck more and more, I have come to the conclusion that Mewtwo V-UNION Stall is not only very strong, but perhaps one of the best decks in the format. How about we take a look at the way it works?

How Does Mewtwo V-UNION Work? 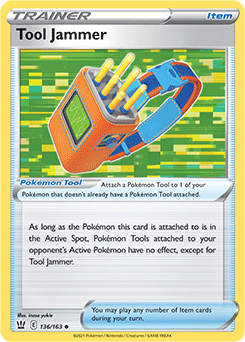 Ultimately, the goal of Mewtwo V-UNION Stall is to make a board of solely a Mewtwo V-UNION, often with Tool Jammer attached, repeatedly using its Super Regeneration attack. In the current state of the Standard format, largely made up of Origin Forme Palkia VSTAR and Arceus VSTAR decks, healing 200 damage is a perfect amount, almost always healing all of the damage that a Mewtwo V-UNION takes, leaving a stalemate board state. From this point, one of two objectives can be reached. Either you will win the game by using Boss's Orders to strand something in the Active Spot while the opponent slowly runs out of cards in the deck, or you will use Mewtwo V-UNION’s Psysplosion to slowly take all of your Prize cards. The right win condition varies based on a variety of factors, but how you get to this point always stays the same.

The early game for this deck is quite different than for many stall decks, opening much more like the Cinccino mill deck from early 2020. The simple version is that you want to aggressively turbo through your deck with Snorlax, Professor's Research, Trekking Shoes, and the newly released PokéStop from Pokémon GO. However, while doing this, you need to focus on five primary goals:

The first two goals are pretty obvious. In order for this deck to operate, you need to get all of the Mewtwo V-UNION pieces into the discard pile in order to assemble it and put it into play. However, the goal of the deck also is not to just shove Mewtwo V-UNION into play the second you can — you also need two Psychic Energy in your discard pile in order to get full value from the top left piece of Mewtwo V-UNION‘s Union Gain, which powers up Super Regeneration instantly. The turbo discarding strategy is supported by the combination of tshe turbo draw tools the deck plays, such as Professor’s Research, as well as Galarian Meowth. While we do not play Galarian Perrserker, Galarian Meowth’s Evolution Roar still allows us to discard two cards from our hand, serving a dual purpose of removing clutter from our hand while also shuffling the deck if we happen to get hit with an unfortunately timed Marnie.

Goal three also synergizes well with the first two goals. Getting the deck as small as possible is absolutely critical to accomplish the deck’s end-game objectives, so just throwing away everything to accomplish the deck’s ultimate strategy is often ideal, even if it could seem wasteful. Have a Pokemon Tool in your hand that you know you will need later, but is clogging up your hand now? Pitch it. Extra Supporters that you know you will not need in the next turn or two? Pitch them. You get the idea.

Goals four and five are the only absolutely critical conservation goals in the entire deck. This deck ceases to function if it cannot “infinitely” loop Cyllene and Pal Pad, so losing all of the copies of these is game-losing. On the other hand, keeping around a Scoop Up Net, while not an absolute necessity, is generally wise to both remove a Pokemon from the field and provide an immediate pivot into Mewtwo V-UNION. However, if all else fails, using a Twin Energy to retreat with Galarian Meowth or Miltank will suffice.

Lastly, while I did not include it in the goals, it is critical to check on the cards in your Prizes, as Peonia usually needs to be incorporated into the deck-thinning process in order to make sure all critical pieces are in the deck. During your first deck search, it is absolutely critical to check for all four Mewtwo V-UNION pieces, both Cyllene, both Pal Pad, Team Yell’s Cheer, and at least three Energy cards, with two or more being Psychic Energy. If any of these are not in your deck, you must Peonia during the game to make sure you have access to them during the end game.

Once we have accomplished all of our goals, we can finally assemble Mewtwo V-UNION, Scoop Up Net to make it our Active Pokemon, attach an Energy, use Union Gain, and move from the early game into the end game.

Now that Mewtwo V-UNION is in play, it becomes mostly self-sufficient, endlessly using Super Regeneration to heal itself. Where things can get difficult is when we need to weave Cook into our loop, but to understand that, I must explain the loop itself. 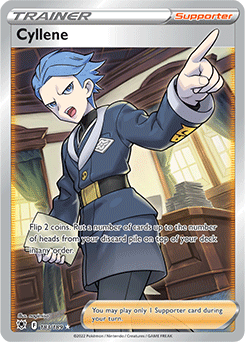 Through some careful maneuvering of your Cyllene, Pal Pad, and Team Yell's Cheer, you will inevitably have four of five of these cards in your deck and hand (the last one in the discard pile will be a Cyllene), often alongside Pyukumuku (which is not a necessary card for the loop, but it is nice for instant access to a card off of Cyllene if necessary) as well as some extra resources.

At this point, you play Cyllene. If you flip at least one heads, get back your other Cyllene. If you ever flip two tails, you play Team Yell’s Cheer on the following turn, getting back both Cyllene and a third card if necessary. Then you Cyllene again on the following turn, recovering at least Team Yell’s Cheer if you get at least one heads.

Member
Um, guys, the list is stuck behind the paywall again. I seem to rememeber someone (maybe PMJ?) saying that that's not supposed to happen?

Charmaster:) said:
Um, guys, the list is stuck behind the paywall again. I seem to rememeber someone (maybe PMJ?) saying that that's not supposed to happen?
Click to expand...

Isaiah might have a different modified decklist tho, like the modded regi deck that won at full grip games

Member
fudge this deck, had to face 2 opponents with this shit last time I went out to a Standard tourney.

Charmaster:) said:
Um, guys, the list is stuck behind the paywall again. I seem to rememeber someone (maybe PMJ?) saying that that's not supposed to happen?
Click to expand...

I never said that.

Get your ass back in the discord bro we miss you