Hello PokeBeach readers! As promised in my last article, I am back again today with another piece of Pokemon content for you all. If you haven’t checked out that one yet, I definitely recommend giving it a go! You will get to read a ton of information pertaining to Eternatus VMAX and the Standard format as a whole. Enough about the past, though, as it is time to keep up with the current events of Pokemon!

Online tournaments have been happening every single day, Champion’s Path has come out, Players Cup II has started, and the Standard metagame continues to progress. I am going to be touching a little bit on all of that today, but my main focus is definitely going to be on Lucario and Melmetal-GX in Standard! I have mentioned it quite a bit since it’s debut at the final stage of the first-ever Players Cup, but I have never actually written about the deck itself yet. Today that will change, so I hope everyone is feeling in a bit slower of a mood! Without further ado, let’s take a look at my current list for the deck. 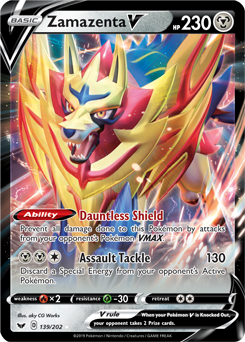 These are the only Pokemon in the deck, so I decided to lump the whopping variety of three into one section here! To start things off with one of the best Pokemon ever printed, Zacian V‘s inclusion should not be a surprise to anyone. The card has had many successful decks based around it, mainly Arceus and Dialga and Palkia-GX / Zacian V, Combo Zacian V, and now this version nicknamed “The Safe”.

With the current rules, it gives you something great to end your turn one with thanks to its ability, and it has a nice attack and solid HP. It flows well with the two defensive beasts in the deck, Lucario and Melmetal-GX and Zamazenta V thanks to all of them being the same type and benefiting from things like Metal Saucer and Full Metal Wall GX. Lucario and Melmetal-GX is included pretty much solely for the GX attack, as it keeps almost every deck from being able to do enough damage to OHKO a Zacian V thanks to some additional protection from Metal Goggles. It also slows the game down quite a bit because a lot of decks lack a good response to a turn two Full Metal Wall GX clearing Energy off of the Pokemon they have been committing resources to in the early game. Zamazenta V is the only Pokemon in the deck that will not see the light of day every game because it is not an absolutely necessary part of the deck and is only used against VMAX Pokemon. VMAX decks simply don’t have a great answer to Zamazenta V right off the bat, and all of the healing and damage reduction this deck brings to the table makes that task even more difficult for the opponent.

This is this list’s lineup for the Tag Call engine, which is a pretty thick one to be honest. Two Mallow and Lana is seen in most lists, but I have seen Tag Call being skimped on and Cynthia and Caitlin being played as a one of. Tag Call is great in the early game because it finds you Lucario and Melmetal-GX, leaving your Quick Ball to be used to find Zacian V. On top of that, it is a consistency out because it finds you Cynthia and Caitlin, meaning you will at least draw some cards for the turn. Having two allows you to make use of it in the early game if needed, but also keeps your Tag Call live for later in the game as some extra protection against Marnie. Speaking of Marnie protection, Tag Call can be used to put a Boss's Orders in your hand that did not come from the deck (via Cynthia and Caitlin), meaning if you do lose your hand to a Marnie, it isn’t like you had to dig for it the turn before only to have it tossed on the bottom. This works for any of the supporters in the deck, but I used Boss’s Orders as an example because of how good it is at closing games.

Mallow and Lana is a more situational card when compared to the other pieces of the Tag Call engine, as you often want to use it when you are actually healing relevant damage. Otherwise, it is better to instead use a Switch to be able to attack after using Brave Blade the turn before, but Mallow and Lana is a good way to reset this when the preferred option is not available. In terms of healing, Mallow and Lana does have great synergy with the damage reduction this deck provides.

These will be mentioned at other points in the article due to having solid synergy with things like Mallow and Lana and Full Metal Wall GX, but I want to make sure this card gets the respect it deserves. Without Metal Goggles, this deck flat out would not exist. It is a huge part of why this deck is as strong as it is against Arceus and Dialga and Palkia-GX / Zacian V and Eternatus VMAX. Against Arceus and Dialga and Palkia-GX, your opponent will use Altered Creation GX and you will use Full Metal Wall GX. Once the Zacian V battle begins, they will be doing 230 damage after both GX attacks cancel each other out, which is where Metal Goggles makes all of the difference. The extra thirty damage that Metal Goggles reduces stops your Zacian V from being knocked out in one attack in this situation, one that happens every game, and your Zacian V will be able to knock out opposing Zacian V in one attack. Against Eternatus VMAX, Metal Goggles not only reduces damage like it does in every other matchup, but your already beefy Pokemon are protected from Galarian Zigzagoon pings as well, leaving your opponent with no real way to contest Zamazenta V or Knock Out Pokemon in one attack.