Hello PokeBeach readers! It’s an exciting time with region qualifiers of the Players Cup II behind us and Vivid Voltage about to be released. In this article, I am going to be going over a card that most people have ruled out as “unplayable” or too weak. I am here to prove that Gardevoir VMAX is a strong card with potential, as well as go over some deck building strategies to show how I can take “bad cards” to top finishes at regional events.

At first glance, Gardevoir VMAX is not appealing. It has a low damage output and it isn’t easy to set up. But Gardevoir VMAX does have 320 HP, which means it cant be OHKO’d by any deck in the format other then Centiskorch VMAX. Something else to note is that Gardevoir VMAX has a Metal-type Weakness, so in normal circumstances a Zacian V can KO it. However, my deck list for Gardevoir VMAX will include four Weakness Guard Energy because a deck cannot thrive in this current meta if it loses to Zacian V.

The strategy behind Gardevoir VMAX is to use its large amount of HP to the best of its ability. In addition to 50 damage healing from Gardevoir VMAX’s Max Cure attack, the deck includes Suspicious Food Tin, Mallow and Lana, and Victini to consistently heal any and all damage done to Gardevoir VMAX. This allows Gardevoir VMAX to win every Prize trade through healing while being able to consistently 2HKO the entire format. Lets go over the deck list.

This version of the deck is similar to how Primal Groudon-EX used to be played. You build up your attacker on the Bench, while letting your opponent Knock Out some single-Prize Pokemon or CARD NOT FOUND .

Now it may seem strange to only run two copies of the main attacker in a deck because most decks run three or four. In this deck, the focus is to never let Gardevoir VMAX get KO’d after it is set up. With that game plan in mind, you should only need one Gardevoir VMAX in play. This allows more room for other tech options.

As much as I would prefer not to play these cards, they are needed to keep this deck consistent. I chose to play two copies of Crobat V instead of a split between Crobat V and Dedenne-GX because this deck runs Power Plant. Plus, this deck doesn’t want to discard too many cards. Eldegoss V helps the deck in multiple ways. It can return a Marnie or Professor's Research to hand, but most importantly it can return Mallow and Lana, technically turning Quick Ball into a way to search out healing. While I do think this deck would be stronger if it could avoid playing any two-Prize Pokemon, I feel it is a necessary evil in the current format to help with its consistency. 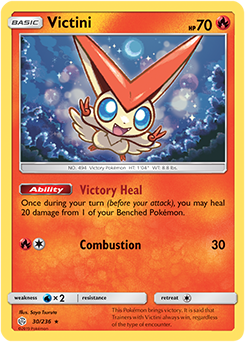 A great healing option for this deck, Gardevoir VMAX can thrive in this format when you combine Victini with Mallow and Lana to move Gardevoir VMAX to the Bench to heal 140 damage. As a single-Prize Pokemon, Victini is good because you can put multiple copies on the Bench without worrying they will be targeted by a Boss's Orders. For this reason, Victini is better then Indeedee V, because while Indeedee V does have a better Ability it gives up two Prizes. In the current format, multiple two-Prize Bench sitters will lose you games.

This may seem like a low number of Supporter cards, but this deck doesn’t need so many once it sets up. You use a draw Supporter for the first couple of turns, then look to play Mallow or Lana to heal up your Gardevoir VMAX or use Boss’s Orders to take an important KO. If I were to add more draw Supporters, I would choose Bird Keeper. Bird Keeper has some added value in this deck as it moves Gardevoir VMAX to the Bench, allowing you to activate Victini’s Ability and get off some extra healing. If you feel the deck doesn’t have enough draw Supporters and you do want to add Bird Keeper, I suggest cutting Power Plant first.

This deck’s main focus is to heal. Mallow and Lana not only does that job but allows us to activate Victini as well. Mallow and Lana is the most important card in the deck as it provides the largest amount of healing. Additionally, it helps the deck flow smoothly by giving us another switching option. I have considered adding a third copy of Mallow and Lana or adding a Cynthia and Caitlin. The latter doesn’t only retrieve Mallow and Lana, but adds a small boost in draw power. I currently don’t play these additions because the deck is tight on space, but keep in mind — the more you are able to heal, the stronger this deck gets.