As we gradually leave the era of GX Pokémon and enter the world of V and VMAX Pokémon, it stands to reason that cards that relate specifically to GX Pokémon, whether to help them or counter them (Cherish Ball, Power Plant, etc.) will get less powerful. In particular, Mewtwo and Mew-GX, whose strength lies in copying the attacks of many other GX Pokémon, has stopped getting new cards it can use, and will generally get outpaced by new, more powerful archetypes. Especially as many GX Pokémon will rotate out of Standard in August. This is not a new concept, it’s been discussed by many players, including myself. 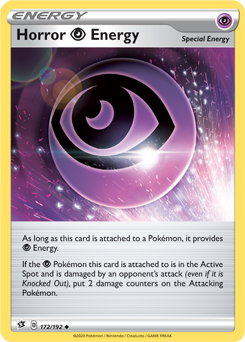 Recently, Henry started popularizing a new take on the deck, which he dubbed Galaxy Mewtwo and Mew-GX, on his stream. If Ultimate Mewtwo and Mew-GX was enabled by Aurora Energy, Galaxy Mewtwo and Mew-GX can only exist thanks to Horror P Energy. Unlike every other Mewtwo and Mew-GX deck before it, this one doesn’t use any dedicated form of Energy acceleration — neither Malamar, Welder, nor Sol Burst GX (although it can use Jirachi-GX‘s Star Search), and focuses on attacks with low Energy costs instead, including Yveltal-GX‘s Doom Count GX. It’s a strange deck by many aspects, and I would call it experimental, but Henry was the one who thought about using Naganadel-GX in Zoroark-GX / Dewgong last season, so I’ll always give his ideas a try. Galaxy Mewtwo and Mew-GX has its issues and bad matchups, but it’s a very viable rogue deck. Players have already found success with it in online tournaments, and it’s a lot of fun to play because of all the options there are. If that piques your curiosity, then read on as we explore how the deck is built, how it plays, and its strengths and weaknesses!

When Ultimate is Not Enough

Ultimate Mewtwo and Mew-GX was the cool new way to play Mewtwo and Mew-GX when Sun and Moon came out. The deck would try to use Sol Burst GX on turn 1 most games, and then use attacks depending on what was across from it. Mewtwo and Mew-GX could copy Reshiram and Charizard-GX‘s Flare Strike to OHKO Zacian V, Vileplume-GX‘s Massive Bloom on turn 2 if it went first (no Sol Burst GX), or Blastoise-GX‘s Rocket Splash to OHKO anything if you had enough Energy in your deck. You could even include additional attackers beyond Mewtwo and Mew-GX: Xerneas Prism Star was a popular addition to deal with Arceus and Dialga and Palkia-GX. Basically, with all the multitype Energy cards in the deck, and a way to get a lot of them out of turn 1, you could include basically any attack.

Despite that, though, Ultimate Mewtwo and Mew-GX tends to be a bit linear in the early game. Basically, in most matchups, you need Sol Burst GX, and if you don’t get it on turn 1, you lose. Also, you can’t afford to whiff anything. Plenty of matchups end up being a race. If you miss an attack because you didn’t draw into the Energy on the right turn, then you get behind, and it’s almost impossible to come back because the deck doesn’t have space to play Reset Stamp, and with so many GX Pokémon on the Bench (including Dedenne-GX), opponents will have plenty of Great Catcher targets to close out the game, so you can’t really stall it out.

In addition, Dragapult VMAX, released in Rebel Clash, quickly became one of Mewtwo and Mew-GX’s worst problems. It hits it for Weakness, so it can OHKO it, and with 320 HP, it’s out of range of most damage options. You’d need six Energy to remove it with Rocket Splash, or to tech a Dark Pokémon such as Mega Sableye and Tyranitar-GX.

Galaxy Mewtwo and Mew-GX was made to overcome these problems. Instead of using Sol Burst GX to get a lot of Energy in play, it would use low Energy attacks! One such attack is Yveltal-GX’s Doom Count, which can OHKO Dragapult VMAX, or anything else. You just need four damage counters (exactly) on the opponent’s Pokémon. It just so happens that Mewtwo and Mew-GX just got Horror P Energy at its disposal, which already puts two damage counters! Other ways to put damage counters on the opponent’s Pokémon include Galarian Zigzagoon + Scoop Up Net and various attacks: Garchomp and Giratina-GX‘s Linear Attack (Calamitous Slash is also a good attack to use in combination with Horror P Energy) and Alolan Raticate-GX‘s Chuck Away can both deal exactly 40 damage.

Apart from Doom Count GX, it’s possible to use Reshiram and Charizard-GX’s Outrage or Vileplume-GX’s Massive Bloom (depending on whether Mewtwo and Mew-GX is damaged or not) to deal heavy damage for two Energy. There’s always a lot of options, though. Should you try to set up a Doom Count GX KO or just hit into your opponent to 2HKO it? Is Linear Attack the best choice on turn 1, or is it better to use Star Search to put one more Energy in play? It will always depend heavily on the exact situation.

In fact, most of your decisions will be very situational. More than any deck I’ve played (this season at least), it’s hard to provide a guiding map to every matchup. In each case, you’ll have to decide depending on the board and, especially, the cards in your hand, what you want to do. Understand when your opponent can KO you and when they can’t, whether they have healing available or not, and play in consequence. If your hand is filled with Scoop Up Net and you can Quick Ball for a Galarian Zigzagoon, maybe go for a big Doom Count GX play. If your opponent has a slow start, try spreading damage so you can get big KOs in quick succession (Doom Count GX and Calamitous Slash, maybe) when they start attacking.

I’ll start with the decklist that Henry Brand recommends right now, although many changes are possible. I’ll discuss some other options below as well.