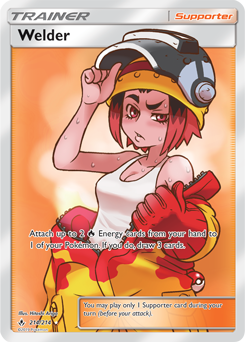 Ever since the release of Unbroken Bonds, Welder has been a consistently dominant card in Standard. There can be a legitimate argument made that Welder is one of the most powerful Supporter cards of all time. The Energy acceleration it provides is unmatched by other Trainer cards, and because Welder allows you to draw more cards at the same time (unlike, say, Mina), it provides that Energy acceleration without substantially impacting consistency on the turn following its use. Fire type Pokemon have been strong recently, but not overwhelmingly so compared to other types — the difference is that Welder allows Fire decks to outspeed, and thus outperform non-Fire decks. Welder-based decks have been a consistent fixture in tournament results since its release — during the 2020 season, it won both International Championships, as well as the 2019 World Championships — and it looks to continue to be a dominant card in the future. Looking forward into 2021, there’s no reason to think that Welder decks are going anywhere. The biggest difference will be in which Pokemon utilize Welder. Reshiram and Charizard-GX and Mewtwo and Mew-GX have been the traditional big Basic partners for the Supporter, but both are rather lackluster when compared to Pokemon VMAX. Luckily for fans of the Fire type, the upcoming Darkness Ablaze set has not one, but two powerful Fire-type VMAXes included, in Charizard VMAX and Centiskorch VMAX. Both are fairly similar, quite powerful, and should be able to make a competitive splash right away. In this article, I’ll be going over both of them, including the pros and cons of each, the early decklists that I have found success with, and a guide to approaching various matchups. In addition, you’ll be able to find out which of the two I ultimately think will have more success (and why)!

To start, let’s take a look at the cards themselves.

At its most basic, the strategy for playing Centiskorch VMAX and Charizard VMAX is the same: you want to use Welder to accelerate Energy onto your VMAX, then use that VMAX’s high-damage attack to take a OHKO on whatever gives you the most Prizes. The biggest difference between these two decks has to do with the difference in how the two VMAXes’ high-damage attacks work. In the Centiskorch VMAX deck, the flexible damage output of G-Max Centiferno means that a Centiskorch player can tailor their Energy attachments to match what they are playing against. When playing Centiskorch, you’ll want to determine how much Energy you’ll need to get a OHKO against what you’re playing, and power up your Pokemon accordingly. If you’re playing against a deck whose attackers top out at 200 HP, for instance, you won’t need to attach more than four Fire Energy to any one Centiskorch VMAX; likewise, if you’re playing against another VMAX deck, you’ll need to decide between attempting to attach seven Fire Energy to a single Centiskorch VMAX (something which, while it isn’t necessarily difficult in this deck, is a quite large devotion of resources), or aiming for 2HKOs with smaller Energy attachments.

In contrast, Charizard VMAX is far less flexible in its damage output, which does lend itself to a slightly different strategy. For Charizard VMAX, the goal isn’t to power it up massively one time like with Centiskorch, but rather, to be able to power it up over and over again. Against high-HP Pokemon such as VMAXs, Charizard’s lower Energy requirement for OHKOs makes it easier to transition from one Charizard to another. However, against lower-HP Pokemon, Charizard’s one-size-fits-all approach to damage means that it will have a higher Energy requirement in comparison to Centiskorch VMAX.

The other differences between these two are somewhat minor, but can still be important. One is the HP; the ten extra HP that Charizard VMAX has can come into play, as it means that a boosted Zamazenta V will need three attacks to KO it, as opposed to two, and it can also be quite relevant in the Fire match, as it means that Centiskorch VMAX will need an additional Energy to achieve a OHKO. The Energy cost of Charizard VMAX’s attacks is also relevant; the Colorless requirement for some of them allows this deck to play some non-Fire Energy if it so desires. In the decklists below, you’ll see how that can come into play.

Here is the Centiskorch VMAX list I’ve been using. Shout out to Jac Carter for putting together the initial build that we used in testing — this list isn’t terribly far off from that first draft!

This deck sports a nice, compact Pokemon line as far as attackers go, which allows it to play plenty of support Pokemon. Since you rarely need to attack with more than one Centiskorch VMAX, I’ve opted to play only a 3-2 line, though this can admittedly get troublesome if one is prized. The four Jirachi, the Dedenne-GX, and the Crobat V are all included so that you can find Welder as quickly as possible, and Eldegoss V provides a way to recover it off of Quick Ball if necessary — an excellent option in a format with Reset Stamp. Volcanion is only useful when going second, but the advantage you gain from being able to use Flare Starter on turn one is so large, that it is worth including a second copy to help ensure that you can use it, even if one Volcanion is prized. Between Flare Starter, attachment for turn, and a single Welder, you can get enough Energy on a Centiskorch VMAX to OHKO an opposing Tag Team as early as turn two — add a second Welder to that mix, and it can OHKO any Pokemon in the game! Given how tough it is to OHKO Centiskorch VMAX itself, you can easily follow up the first KO with another one, while powering up a second attacker. Alternatively, the Centiskorch player can then easily pivot to the only Pokemon I haven’t mentioned yet: Heatran-GX. Since Centiskorch VMAX not only soaks up a ton of Energy, but also powers itself up further with its attack, it combos perfectly with Hot Burn GX. An excellent play here is to power up the Centiskorch, take a big KO with it, then, if the opponent damages the Centiskorch, switch enough Energy to take another KO onto the Heatran GX, and attack with that. In most cases, this will leave a decent amount of Energy on the damaged Centiskorch VMAX, so that if the Heatran-GX then gets KO’d, the Centiskorch VMAX itself can act as a finisher. Heatran GX can also get some surprise knockouts, since it will take one less Energy to get those Knock Outs against high-HP Pokemon. For any Energy amount over four, Heatran-GX is a more efficient attacker than Centiskorch VMAX; this can be relevant against Pokemon such as Eternatus VMAX or Charizard VMAX (Hot Burn requires seven Fire Energy for the OHKO, instead of eight).

As Welder decks in the past have proved, you don’t need anything other than Welder itself as a draw Supporter, and now that we have Crobat V in addition to Jirachi and Dedenne-GX, finding Welder is easier than ever. Eldegoss V helps further, and it makes it so not as many spots in the deck need to be dedicated to Boss’s Orders.

With the exception of the Reset Stamp and Pal Pad, every Item in this deck can be thought of as being dedicated to the turn one Flare Starter play, and the turn two Centiskorch VMAX after that. Quick Ball is a given, but the use of Pokemon Communication as the second Pokemon-finding item is due to the balance it provides between finding the Centiskorch VMAX, and everything else. Evolution Incense could be used in the spot, but it would be useless after you found the VMAXs. Great Ball isn’t as reliable as Pokémon Communication, particularly since this deck often needs one particular card (such as the VMAX), as opposed to a generic Pokemon. So, Pokemon Communication gets the spot; it might not be the obvious pick with only 15 Pokemon, but it is the best one. Pokemon Communication also combos quite well with Scoop Up Net, as you can pick up something useless like a Jirachi, and then turn it into something useful, like a Centiskorch VMAX. The Reset Stamp is a must-have for when games don’t go so well at the beginning, as well as in the ADP matchup; since many opponents will try to beat Centiskorch not by attacking it, but by gusting around it, you can use Reset Stamp to push them off of Boss’s Orders, and thus buy yourself another valuable turn.

Sixteen Energy seems to be a nice middle ground for this deck; not so many that they become overwhelming, but also enough to where you will consistently have them for Welder. The three Heat Fire Energy have the added HP bonus, which is quite nice against the mirror match, or other decks that might aim to OHKO Centiskorch VMAX. It isn’t quite as helpful against decks with lower damage output, as this Centiskorch list doesn’t contain any way to heal the Centiskorch, and most of that style of deck will go for a strategy of targeting the Bench Pokemon, as opposed to the Centiskorch VMAX itself. Heat Fire Energy does have a downside too, in that it can’t be attached with Welder, hence why I haven’t included four of them in this list. While they are nice, the added Welder consistency is even better!

This list is based upon the above Centiskorch VMAX list, as the strategies for the two decks are quite similar. Here is what I’ve been using: