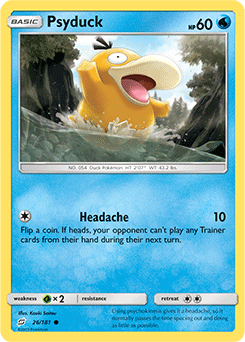 When the competitive circuit was suspended, I expected the metagame to stagnate more than usual. Usually, big innovations, whether it’s a new archetype, an update of an existing one, or a tech to counter the metagame, occur at major events: Regionals and International Championships. We rarely see a new archetype pop up at League Cups. Part of it, arguably, is that when a new deck actually appears at a local event, most players won’t know it, due to that event’s lower visibility. However, that explanation alone isn’t all, since many decks actually debut at major events without being played at League Cups beforehand. (This is especially true for the Expanded format, where each major event is the occasion for some players to bring a brand new concoction.) Since players tend to be most creative at the biggest events when there’s money and Championship Points on the line, I thought that, in an era of only online tournaments, most of which have either small or no prizes, we would see less creativity. I expected most players to copy existing lists without trying to break the metagame since there’s so little on the line.

However, while I don’t have data to prove or disprove that claim (personally, I feel like I’ve had less drive to build new decks, but that’s anecdotical), I was definitely wrong about the metagame stagnating. A few weeks ago, I wrote that the four big decks of the metagame were Pikachu and Zekrom-GX, Dragapult VMAX, Blacephalon and Arceus and Dialga and Palkia-GX / Zacian V. This has changed: ADP / Zacian V, while still a solid deck, isn’t in my top 5 at the time of writing. The Combo Zacian (or Speed Zacian) variant, that uses Jirachi Prism Star and Mr. Mime instead of Altered Creation GX to take extra Prizes, dominated Limitless Qualifier #4 and should be considered a top tier deck.

We also saw a rise in usage of Spiritomb, which ended up taking the top two spots in the Limitless Invitational. Once again, ADP was removed from decklists; Spiritomb’s partners, apart from Jynx, are now other one-Energy attackers, such as Buzzwole and, depending on the list, Pokémon such as Nihilego, Blacephalon-GX, Buzzwole & Pheromosa-GX, Cryogonal or Yveltal-GX. This archetype has a high skill ceiling (since it requires resource management, good sequencing, and Bench management), and there are lots of ways to build the deck, which is perhaps why it took a while for it to appear on most players’ radar. (For more information on Spiritomb, check out Grant’s recent article!)

Another example of a deck that emerged during the Rebel Clash meta is Unown HAND / Salazzle. The idea of drawing a huge amount of cards with Salazzle in order to win the game with Unown HAND is not new — in fact, it has been around since Salazzle’s release in Unbroken Bonds — but it has always struggled against hand disruption, something that’s ubiquitous now since almost every deck plays either Marnie or Reset Stamp (or both).

However, we’ve seen this deck reappear lately in a new variant, using Psyduck from Team Up in combination with Will in order to Trainer lock (not Item lock!) the opponent, preventing them from using Marnie or Reset Stamp. As far as I know, this variant was first played by a player named Vance Kelley at the Limitless Qualifier #4. Although he didn’t make Day 2, the deck’s uniqueness appealed to YouTubers and streamers and they introduced their audiences to it, who in turn may have adopted the deck.

It would be easy to dismiss this deck as simply a funny idea for a YouTube video that doesn’t actually work. It might have been my reaction to it as well, except that my first exposure to the deck was losing to it in the finals of a TCGO tournament, and I’m pretty sure my opponent was Sander Wojcik, the master of decks that don’t actually win by taking Prizes. I was definitely intrigued and, after talking about it with Ithiel Arki (someone I’ve mentioned before, but in case the name is unfamiliar, he made Top 4 at the first Limitless Qualifier, and is also the deckbuilder behind the Green's Exploration + Blacephalon decklist I won Bochum Regionals with back in January), we decided to try out the deck at an online tournament in the French community. I had no particular expectation but ended up getting second place, which cemented my impression that the deck was underrated compared to its strength. I think that the metagame might be getting This is why today, I’d like to discuss this Unown / Salazzle deck. I’ll talk about my decklist, matchups, and some tips to get the most out of the deck.

Before we dive into the deck, though, some fair warnings:

– This deck is not too interactive. From a certain point, you’ll be preventing your opponent from playing Trainers, so they won’t be able to do much. Indeed, if your opponent has ways to interact with you beyond just Knocking Out your Active Pokémon, that’s a bad sign, since Unown / Salazzle doesn’t have many tools to retaliate. Depending on your personal tastes, that may put you off or, on the contrary, appeal to you!

– Because of this, the deck is repetitive to play. You’ll do basically the same thing every game, with only limited reactivity to what your opponent might try to do. I must admit that playing the deck on ladder bores me because of this, but it might not be a factor for you (especially if you’re looking for a deck for a tournament!).

– As a result, the deck can have some polarized matchups. Now, most of the games will actually tend to be close, but matchups where your opponent can’t disrupt your hand (such as Blacephalon) are basically free wins. On the other hand, there are cards that you simply can’t beat. To give one easy example: Galarian Weezing prevents Unown’s Ability, so you simply lose. Of course, that specific card has seen almost no play that I know of, but there are other issues. I’ll discuss them in a later section.