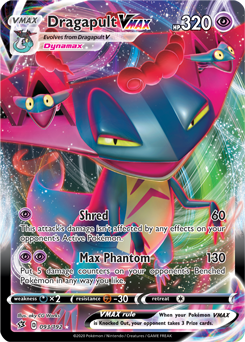 With Rebel Clash finally dropping on PTCGO, Dragapult VMAX is all the rage online now. Will it be the only successful Pokemon VMAX? Another promising card to come from the set is Toxtricity VMAX! The same 320 HP is a huge plus, as is Toxtricity VMAX’s hard-hitting attack. G-Max Riot’s Two Lightning and one Colorless Energy is a big ask, but keep in mind that Lightning-type Pokemon have some of the best Energy acceleration the Standard format has to offer. This deck is a little higher maintenance than Dragapult VMAX, but its upside is a nearly unlimited damage output. G-Max Riot starts off at 240 damage, add 10 more to that from Poison damage, then more as needed with Electropower. Garbodor was practically made for this deck, it works as a damage modifier and the “unlocking key” for G-Max Riot. A little-known promo, there’s actually another Toxtricity V with a different moveset for your attacking needs. This deck gets the support of other Lightning Pokemon like Zeraora-GX for free Retreat Cost and benefits from Speed L Energy, literally speeding you up while counting as your Energy attachment for turn.

So why is another “Stage-1” Pokemon with a bulky attack cost good? The damage output is astounding and should be enough to overwhelm a variety of metagame decks, such as but not limited to Arceus and Dialga and Palkia-GX / Zacian V. When exploring archetypes from a new set, it’s a good idea to start by practicing against the best deck from the last format; this deck holds up to it if you set up well and avoid putting down your two-Prize Pokemon. Playing those down creates an out for your opponent, because 320 HP is far too much for the average list to handle. In any case, against other stuff like Pikachu and Zekrom-GX or Mewtwo and Mew-GX, you’re a better version of their deck: you swing for more and have more HP.

The key to making this Pokemon VMAX competitive is to focus on consistency. If you lack in that department, you’ll be missing attachments, missing evolutionary plays and falling behind. Speed L Energy helps out a lot in that department, as does the inclusion of Acro Bike. You’re able to set up while keeping your two-Prize Pokemon off the field in games where they are liabilities. Here’s my current list for starters: