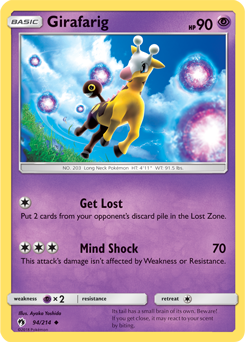 Many moons ago, I wrote my first article for PokeBeach: a piece about Vespiquen / Flareon. Today I return again, a different person, nearly two years later, to talk about the very same deck. In news concerning the deck, Zebstrika came out, partnered with the deck, and recently Zakary Krekeler walked us through the deck’s rejuvenation in Expanded. I come bearing some new techs to introduce to the deck; some options that will be more than worth playing, including something to counter this deck’s “Public Enemy #1”: Girafarig.

This deck had sunk into oblivion until Connor Finton ran it back at California Regionals. Vespiquen was positioned extremely well going into this event. It was completely under the radar, and with control decks taking Oregon Regionals by surprise, the attention to a deck like Night March was completely gone. It seems like whenever Night March drops in popularity, cards like Karen go away. Those are the most opportune moments for Vespiquen to strike. That’s exactly what happened, and in a field full of two-Prize Pokemon, the non-EX/GX attackers of the deck took it all the way to the finals.

The question moving forward is if we’ll see more Girafarig or Karen, but this deck packs answers to both — albeit soft counters, but counters nonetheless. These counters to the counters are Natu and Zebstrika.

Natu is played with Girafarig in mind. The idea is to surprise an opponent once the Pokemon count for you starts to rack up from Get Lost. The issue that Finton ran into in the finals of the Regionals was Girafarig itself, essentially preventing him from playing the game as it is designed at all. Without Pokemon in the discard pile to boost Bee Revenge, he was left to squalor and eventually bleed out from the slow grind and lost. Natu can be recycled with one of the two Rescue Stretcher in this deck, but more on that later.

Zebstrika helps out against Karen, as it’s likely that you draw Pokemon off of a Professor Sycamore after a Karen, to which you can use Sprint to get rid of them once more. I’ve written about this concept in depth in my past Night March article, but the idea is the same.

Without further ado, here’s the list my testing group and I have been using:

Two Gallade and One Machoke

These are your Maxie's Hidden Ball Trick targets, improving your Zoroark-GX matchup and your Trevenant BREAK matchup, respectively.

Gallade pairs nicely with this deck, regardless of what you’re up against. Premonition sets up your draws for coming turns and ensures you the most control you can get over your game plan. While a one-shot against Zoroark-GX is nice, it’s truly just a bonus on top of an already upstanding card.

For the aforementioned Trevenant BREAK matchup, Machoke is there to help. It’s solid in other matchups as well, like Buzzwole-GX with its Jet Punch or even the likes of Decidueye-GX with Feather Arrow. It’s a reactive card that you can pick and choose which matchups you want it in. Machoke is also compatible with Ditto Prism Star, making it decent under Item lock if you’re against Trevenant BREAK.

Remember: at worst, these become extra Pokemon fodder for your Bee Revenge and Vengeance attacks.

I must be obsessed with Wobbuffet if I’m writing about it so much… Well, I am! It’s great in any deck right now, stopping Trade and more. You can set up behind Wobbuffet, reaching the necessary numbers for OHKOs in this deck. While you’re not going to naturally start it all too often, you can retreat into it or use your Float Stone to make it your Active Pokemon by the end of your turn. It can buy you time, which is nice.

Again, if it is unnecessary to your matchup, ditch it with no regrets. Playing as many tech Pokemon as possible in decks like this is always nice, giving yourself as many options as possible without changing the integrity of the deck. The techs don’t hurt because against inapplicable matchups you can toss them into the discard pile and use them as damage modifiers.

One Oranguru from Sun & Moon

This is another tech, but a tech support Pokemon this time. Oranguru is nice against those Zoroark-GX / “Exodia” (Red Card, Delinquent, Peeking Red Card) decks that I have written about myself. If you start with Oranguru or leave it on your Bench following your first turn, you can put your opponent in an awkward spot where, yes, they can kill your hand, but you’ll have a way to recover from it. I recommend playing it for that purpose.

Outside of that, Instruct is good at least once in every matchup. Watch out for playing it down against control-based decks since they can trap it in your Active position without a second thought. This same warning holds true in the case of Wobbuffet. 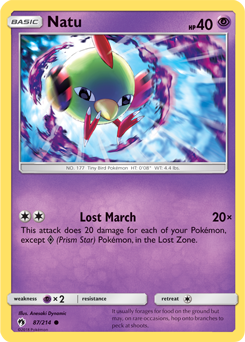 Here’s my boy! I jokingly suggested this inclusion to Finton after his finals loss. After a bit of thinking, I realized that the idea wasn’t bad. I think Natu belongs in this deck purely as a counter to Girafarig; at worst, it’s another Pokemon to add to your damage count.

It takes three Pokemon to be in your Lost Zone before Lost March takes a OHKO, or four with a Fighting Fury Belt on Girafarig. Against a Girafarig, if the situation arises, you can recycle it with Rescue Stretcher. The idea is to break the Girafarig “lock” and force your opponent’s hand at another tactic — perhaps some Quaking Punch uses from Seismitoad-EX, or even Riotous Beating Knock Outs.

Whatever the case and whatever the deck, Natu is nice insurance against what is otherwise a terrible situation where you slowly lose all of your power to operate as a powerful deck.

Back in the day many people didn’t play Exeggcute in Vespiquen / Flareon decks like I lobbied for, but now it seems to have caught on.

Propagate is too strong an effect in a deck like this that wants to use four Ultra Ball a game to pull attackers out and also add to damage counts. Sometimes with multiple Ultra Ball in hand you can’t feasibly use them all without an Exeggcute, so that’s where this inclusion comes in. It’s more than worth it. You don’t want to have to spend resources that you could otherwise keep in your hand.