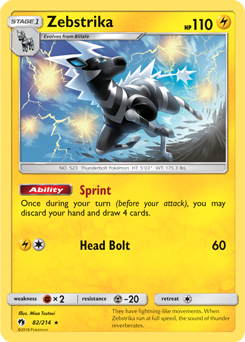 Hello again! Recent League Cups gave us a peek at what to expect in the Expanded Lost Thunder format, and following those, the Anaheim Regional Championships represent our first major tournament with the new expansion. And while Expanded tends to change slowly, I expect players to implement quite a few cards from Lost Thunder. Between new tech cards such as Faba and Girafarig, and new archetypes such as Blacephalon-GX and Lost March, Lost Thunder should impact the format more than other sets in recent memory.

In this article, I go over how the new set affects my top archetype for Expanded: Vespiquen. That’s right, I’ll be talking about bees once again! In Caleb Gedemer’s recent article, he discussed the impact of Zebstrika in Night March — I believe that it benefits Vespiquen even more. In addition, Ditto Prism Starfurther improves consistency and offers more tech options to play! Read on, and I offer some new lists for this powerful archetype, as well as tips on gameplay strategy, matchups, and other tech options!

First, let’s go over the new options from Lost Thunder. Vespiquen gained plenty from the new set — aside from the new Vespiquen deck! As I mentioned above, Zebstrika and Ditto Prism Star become immediate inclusions. As with Night March, Zebstrika’s Sprint synergizes well with Bee Revenge and Vengeance. It gives a quick and reliable way to discard Pokemon, a better defense against a late Karen, and durability against N. In a deck which already focuses on getting Stage 1 Pokemon into play, Zebstrika feels natural, and not at all clunky, especially with the option of using Ditto Prism Star.

Ditto Prism Star fits in any Stage 1 deck, doubly so in decks with multiple different Stage 1 lines like Vespiquen. It offers incredible flexibility, suiting Vespiquen perfectly. I use it in almost every game I play with the deck. Ditto Prism Star also enables tech Stage 1s such as Machoke. It also gives you an element of surprise, allowing you to hide the Basic your Stage 1 tech evolves from. But even without those techs, Ditto Prism Star is an auto-include just because this wild card Basic reduces missed attacking turns as a result of mismatched Basics.

But with the benefits, Lost Thunder brings some new difficulties. In particular, you need to watch out for Faba, Shuckle-GX, and Girafarig. Faba threatens the deck’s reliance on Double Colorless Energy while nullifying Special Charge. Girafarig simultaneously threatens Vespiquen’s damage output, Supporter engine, and any Energy in discard! And Shuckle-GX threatens to slow you down, especially if it is used in conjunction with Energy disruption. All in all, I only consider these new tech cards annoyances for Vespiquen, rather than major threats the way I might consider Karen and Oricorio.

With that, let’s take a look at a deck list!

This list offers a straightforward take on Vespiquen / Flareon / Zebstrika. While plenty of other tech Pokemon exist for Vespiquen, I consider Flareon the go-to, since this effectively lets you run seven of the same Stage 1 attacker, with only a bit of added inconsistency from matching different Basics and Stage 1s; but the deck’s already high consistency and the additions of Zebstrika and Ditto Prism Star marginalize this inconsistency. This pairing offers advantages and disadvantages. On the plus side, your success hinges less on drawing into the right Pokemon in the right order and you get some type diversity. On the other hand, the two possess the same strategic weaknesses.

As for the remaining Pokemon in the list, Exeggcute improves Ultra Ball and Computer Search, Giratina gives the deck a fighting chance against Trevenant, and all other 11 Pokemon improve draw power. All together, not counting the Ditto Prism Star, the deck runs 27 Pokemon to discard, a good number to fuel damage while still letting us conserve enough attackers to get through the game. Even after we account for Zebstrika and a plan to save six 1-1 lines to use as attackers, we can discard 14 Pokemon for added damage — enough to KO a Buzzwole-GX when using Choice Band. That damage output increases when your opponent KOs your attackers, so few Pokemon remain out of reach. With 45% of your deck comprising discardable Pokemon, you should achieve that high damage output consistently. The deck occasionally hits for 190 or more on turn two!

After the 28 Pokemon and the four Double Colorless Energy, 28 spots remain for Trainer cards. The deck’s Trainer engine revolves around Battle Compressor and VS Seeker, both by design and by necessity, which does not leave much room for additional Trainers. The two Special Charge improve late game Energy consistency (provided you aren’t under Item lock), which you need once your opponent starts to chain KOs. The Rescue Stretcher serves a similar purpose and gives flexibility with what to discard with Battle Compressor. You can also use it as Pokemon search when used with Battle Compressor. The deck only runs one Stadium: Parallel City, for the sole purpose of removing any Shaymin-EX or Tapu Lele-GX you use. You want to maintain a board of non-GXs and thus force your opponent to have to take six Prizes.