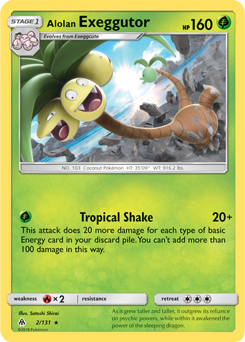 I’ve gone over two of my top options for Anaheim Regionals this weekend in past articles, so I want to try something a little unorthodox: talk about some updates to top decks, and introduce two cool new ones that aren’t as competitive as the rest, but hold their own and are incredibly fun to play. Expanded is home to a wide variety of decks, of varying degrees of viability. Here is a complete list of what I think “exists” out there.

Tropical Shake does 120 at most, but in Expanded you can top that off with Hypnotoxic Laser and Virbank City Gym for an additional 30 damage from Poison. There’s more — Choice Band and Professor Kukui can give you 50 damage more (200 overall now), and finally Seviper can tie off a Zoroark-GX with the finishing 10 damage. A non-EX/GX deck like this doing that much damage for such little cost is really good, and makes for a fun deck in Expanded, something a little different than the rest of the field.

You’re bad against control decks since they can run you out of Grass Energy, Trevenant BREAK is tough since it can take out your Exeggcute before they get to evolve, but against almost every other deck you have a chance at the least. Non-EX/GX builds like Night March might have the upper hand with their ability to attack for one-hit Knock Outs from the first turn onwards and since you have to evolve to your main attacker it can be more tricky. In any case, this deck is a real powerhouse and makes for a super fun way to stay competitive in Expanded without conforming to the norm. 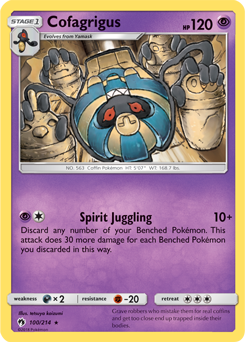 Very similar to M Gardevoir-EX, Spirit Juggling might look like it hurts you at first but upon further examination it pairs quite well with Giratina. You can discard the Giratina over and over and rack up damage on an opponent’s Bench with Distortion Door. All of this is made possible in Expanded with Dimension Valley, letting Cofagrigus attack much more efficiently. Once you have those Giratina in the discard pile (look for Battle Compressor early) you can rinse and repeat, hitting for on average 130 every Spirit Juggling attack until you win.

This deck is really bad against Zoroark-GX, which might be the only thing holding it back from being competitive. Against standard powerhouse Pokemon-EX/GX decks like Blacephalon-GX you can eventually hit the right numbers for one-hit Knock Outs with Distortion Door and then you’ll be rolling. The thing about Zoroark-GX is that it rips through your attackers easily and with such high HP it can be hard to take a Knock Out on, its Psychic Resistance making matters worse. Ability lock in Expanded like Alolan Muk, Garbodor, and Silent Lab further complicates this deck, although it has solid matchups against most non-EX/GX decks, including Trevenant BREAK.