EDITOR’s NOTE: The first deck list has been moved to before the free preview ends at the request of Stéphane.

It’s almost there. At the time I’m writing this article, the Latin America International Championship is only three days away; and by the time you’ll be reading it, it will be even less. Although we won’t have a perfect idea of the metagame until this weekend, we’re starting to get glimpses of it through articles, videos, streams, and results of non-official tournaments. Blacephalon-GX / Naganadel is seen as a major threat, but because the deck is expensive and cards are not as easy to get in Brazil compared to some other countries, it might be underrepresented. Decks like Malamar and Alolan Exeggutor, much more accessible, should be major parts of the metagame. Zoroark-GX is slowly getting back the respect that it earned last season, Lost March is in a perpetually shifting state of hype and counter-hype, Decidueye-GX / Alolan Ninetales-GX is a weird outsider that might have what it takes to take the whole tournament, and some decks like White Kyurem are slipping under the radar.

The deck I want to talk about today is one of those — a deck that’s so stealthy that I think I’m the only one to have talked about it already. Yet, this deck had success in Japan, can hold its own against some of the most hyped decks in the format, and has excellent matchups against many tier two and rogue decks. That deck is Solgaleo-GX / Alolan Ninetales-GX, and it’s one of my top three picks for Brazil.

This article will be my guide to the deck. You’ll find explanations on the deck’s strengths, two lists — a simple and safe one, and a more teched-out and experimental one — and commentary on matchups.

Big Basic Pokemon dominated the Pokemon TCG from the release of Pokemon-EX in 2012 to Guardians Rising in 2017. That’s five years during which a central mechanic of the game, Evolution, was secondary at best. There were a few exceptions, but, in this period, Evolution Pokemon were mostly relegated to a support role for Basic Pokemon, or absent altogether from the better decks of the format. This changed as Pokemon entered its seventh generation, the Sun & Moon era.

Mechanically, Pokemon-EX were replaced by Pokemon-GX, which could be Evolutions. That meant that, for once, the big, ultra-rare, visually impressive cards of each set weren’t only Basic Pokemon, and designers were free to create powerful Evolutions as well. To give only one example, Gardevoir-GX won Worlds in 2017, the first time a Stage 2 Pokemon that actually played its Stage 2 as an Evolution did so since 2011.

This is only speculation, but I believe one reason for this shift is that Solgaleo and Lunala, the star legendary Pokemon of Sun & Moon, are Stage 2 Pokemon, unlike every Legendary Pokemon until now. Since Black & White, Pokemon Card Laboratory have taken special care to feature each game’s box Legendary on powerful — or at least cool-looking — cards. It would have been inconceivable that Solgaleo and Lunala appeared as forgettable, unplayable Stage 2s. Sure, we could have got Basic Solgaleo-EX and Lunala-EX, but this would have erased part of what makes them unique, namely their shared Evolution line. Whether I’m right or not, the fact is that Evolution Pokemon took the game back by storm, and Solgaleo-GX and Lunala-GX (the first Pokemon-GX to be revealed back at Worlds 2016) were a great advertisement for the game and its new direction.

Great-looking cards, sure, but actually not very successful competitively. Although SUM Solgaleo-GX had an amazing Ability, amazing damage output, and a unique and powerful GX attack, it only saw minor success for the longest time. Even after the eventual release of Promo Solgaleo-GX, the deck could still fall victim to the usual issues with Stage 2 decks: reliance on Rare Candy, consistency issues, and so on.

Enter Alolan Ninetales-GX. As I have already explained, Ninetales is the perfect partner to Stage 2 Pokemon as it can find a precious Rare Candy as early as turn two. In fact, since Professor Elm’s Lecture can find both Cosmog and Alolan Vulpix, you can fill your Bench on turn one and, thanks to Ninetales getting you two Rare Candies, evolve into both Solgaleo-GX on turn two. For a long time, Solgaleo-GX required luck to get a good setup. But now, thanks to the consistency boost afforded by Ninetales and Elm, you can reasonably expect to face two 250 HP behemoths on turn two. Suddenly, it’s no longer a joke.

In order to understand the power of this deck, it is important to understand the amazing synergy between the two Solgaleo. Sure, SUM Solgaleo attacks by discarding Energy and Promo Solgaleo can attach the Energy back with Turbo Strike, but the synergy goes much deeper.

SUM Solgaleo can deal 230 damage for only three Energy at the cost of discarding them. This makes it a wonderful attacker against most Pokemon-GX since they’ll give up two Prizes and have a hard time KOing it in response. However, non-GX Pokemon are not that bothered because discarding three Energy to take one Prize is not efficient against them — plus, several of them can threaten to 2HKO Solgaleo back.

Promo Solgaleo, however, is amazing against non-GX Pokemon. It deals 120 damage with only one Double Colorless Energy, and with Professor Kukui or Dhelmise this can rise up to 130 damage, enough to KO some of the game’s most bothersome non-GX attackers. Against a non-GX deck, you can easily switch between two Promo Solgaleo-GX, using Max Potion to heal and Turbo Strike to attach the discarded Energy back. Plus, if the opponent tries to spread damage, either as a dedicated strategy with Tapu Koko or just as residual damage from Shrine of Punishment, you have the ultimate answer in Prominence GX.

Finally, both Ultra Road and Shining Mane answer some of the strategies that could be used against bulky, Stage 2 decks. Ultra Road means you can switch freely between your Pokemon and never find yourself with an unwanted Active Pokemon, even after you discard Energy. It also means that your opponent can’t use Guzma to stall by bringing up a heavy Pokemon in the Active spot. Shining Mane removes Weakness. Without it, the deck would have a glaring weakness to Fire-type decks, but Shining Mane removes this potential flaw.

I should also mention that Ultra Road and Turbo Strike combined mean that you laugh at stall decks’ attempts to stall you out of Energy. It’s not much, but one of the best parts of Solgaleo / Ninetales is that it has answers to many unexpected situations.

In most matchups, both Solgaleo are useful and you want to set up both at some point in the game. Promo Solgaleo provides Energy retrieval so it’s hard to do without, and the deck doesn’t run Switch so it relies on Ultra Road for mobility. However, you’ll often have to prioritize one over the other, and choosing the right Evolution is crucial. The deck also has three options for its GX attack and using the right one is imperative in order to be successful with the deck.

Against non-GX decks, especially if they run Shrine of Punishment, Promo Solgaleo should be the priority. You want to take KOs with Turbo Strike and may not use Sunsteel Strike even once in the game. Even if you have the option to use Sol Burst GX early on, you should not take it unless you have a dead hand offering you no further possibilities — if you can just wait for a Double Colorless Energy, you’ll start taking KOs. Prominence GX is amazing in these kind of matchups because you can switch around between two or three attackers and then heal them completely, ruining several turns of effort by your opponent. 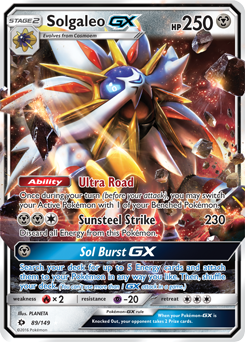 In most other situations, SUM Solgaleo and Sol Burst GX should be the focus. After this attack, you can end up with six Energy cards in play — for example, three basic Metal Energy on SUM Solgaleo, a Double Colorless Energy on Promo Solgaleo, and two Energy on a Cosmog for later. Or you can attach to Ninetales instead if Snowy Wind seems like a good option.

Note that sometimes, against a GX-based deck, you’ll have the option to use Sol Burst GX or Turbo Strike on turn two. For example, you’re facing a Zoroark-GX deck: should you set up your Energy or take the KO on Zorua with Turbo Strike? The answer depends on the exact situation, of course — if you can remove your opponent’s only Zorua from play, it’s probably the best play. However, as a rule of thumb, it’s better to Turbo Strike if you have two Energy in the discard to attach to SUM Solgaleo in order to threaten Sunsteel Strike on turn three; otherwise, Sol Burst GX is the better option.

Your third GX attack is Sublimation GX. It’s the most situational of the three, but can prove useful against Ultra Beasts such as Buzzwole-GX and Blacephalon-GX.

On your second turn, you’ll often want to use Alolan Ninetales-GX, but it’s sometimes better to wait. As a rule of thumb, try to use your first Mysterious Guidance to get a Stage 2 Pokemon into play — otherwise, you’re not getting enough use out of the Ability.