Hello all! We are now just a day away from the largest Expanded event in the history of Pokemon. With so many players attending, and plenty of prep time since the last Regional, there is no doubt that the Dallas Regional Championship will be one of the most anticipated tournaments of the year.

In my last article, I focused on Standard Silvally-GX variants, highlighting the importance of the Silvally-GX’s versatility. In this article, I’ll continue that theme and look at a Pokemon that lends itself to an even larger variety of decks — and is powerful enough to completely warp the Expanded format. I’m talking, of course, about Zoroark-GX, a card that has vaulted into tier-one contention in both Standard and Expanded. As we are about to enter one of the most competitive Expanded events of the season, I’ll use this article to focus on Zoroark-GX in Expanded. I’ll be discussing specific ways to play it, as well as the tricks you need to know to be successful when playing this incredible card. In addition, I’ll be going over my Zoroark variant of choice, and providing a detailed look at the list that I will be playing for Dallas.

What Makes Zoroark-GX so Strong in Expanded?

We know that cards such as Lycanroc-GX, Golisopod-GX, and Decidueye-GX have all been paired with Zoroark-GX to play a major part in recent Standard tournaments. Expanded, however, tends to be a much different experience: decks are faster and can hit harder; Trainer engines are different; and there is a much larger card pool that you have to be prepared for. What is it that makes Zoroark-GX decks able to handle that transition between formats?

To answer that, let’s first look at what cards Zoroark-GX decks gain from the Expanded card pool. Two cards in particular stand out as immediately helpful for every variant of the deck.

Since Zoroark-GX’s damage scales with the number of Pokemon you have in play, a Stadium that allows you to increase that number will naturally be beneficial. Increasing the potential damage of Riotous Beating from 150 to 210 (assuming Choice Band is attached) is a drastic change, as it allows Zoroark-GX to change from relying on a two-hit strategy against bigger Pokemon, to being able to reliably one-shot nearly all Basic and Stage 1 Pokemon. Most importantly, this change means that Zoroark-GX no longer needs to rely on a secondary attacker as it does in Standard; you can instead build a deck that focuses on Zoroark-GX itself as the main attacker, opening up many more options for tech cards or support Pokemon. 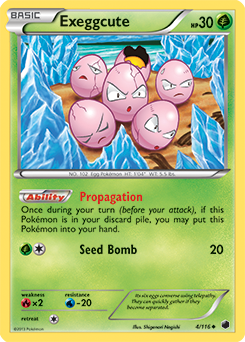 This little Basic combos perfectly with Trade, since you can repeatedly put it back into your hand rather than discarding valuable resources. Previously difficult decisions on what to Trade away can easily be avoided, thanks to Propagation. (That isn’t to say you can’t also use Trade to thin out your deck, however.) Exeggcute also solves the potential problem of running out of Basic Pokemon with which to fill your Bench and fuel Riotous Beating. In many games, the winning play is made possible by Propagating one or more Exeggcute out of the discard pile and then using it to fill up your Bench — particularly at times when you need to use Guzma or Lysandre, and thus can’t play a draw Supporter to dig for more Basic Pokemon.

Of course, Expanded has a few other benefits for Zoroark-GX besides those obvious two. In Standard, we’ve already seen some players cutting down on draw Supporters in the deck, instead using Trade as the main draw engine. In Expanded, you can naturally take that concept to the extreme, thanks to VS Seeker. Many builds in Expanded play as few as two or three draw Supporters, and instead load up on tech Supporters, such as Hex Maniac, Karen, and Acerola. The incredible draw power provided by Trade takes care of most of the typical consistency needs of the deck, while VS Seeker means that you’ll have the flexibility to use whichever Supporter is needed for the situation.

As I’ve said, one of the highlights of Zoroark-GX in Expanded is the vast number of different deck concepts that can center around it. Well-known partners for the card include Lycanroc-GX, Golisopod-GX, and Seismitoad-EX, as well as newer variants such as Vileplume and Magnezone (see articles by Ahmed Ali and John Kettler for more details on those decks). Of course, that list doesn’t include decks that use Zoroark-GX as a secondary attacker or draw engine, such as Night March. Because there are so many different ways to play Zoroark-GX, preparing for the many variants is a much harder task than normal.

A deck that can reliably beat Zoroark has to first deal with Zoroark itself: no small task, given the card’s innate power. Even after that, it still needs to manage to deal with whatever else the Zoroark deck has planned, whether it is disruption (such as in Seismitoad / Zoroark), techs and speed (such as in Lonzoroark), or even more diverse attackers (such as Lycanroc-GX and Golisopod-GX). Very few decks can manage to deal with all Zoroark variants. (For examples of a few decks that can do so, check out Ryan Allred’s recent article.)

So, given all of these Zoroark builds, which one is “the play” that can best navigate the crowded Dallas field? Each build has distinct advantages and disadvantages, and as such, none has been able to pull away as the clear “best” variant.

While there are many different possible ways to build a deck centered around Zoroark, most seem to fit into a few categories. Those are:

All three of these categories contain competitive Zoroark-GX decks, and each should be expected in large numbers at Dallas Regionals. They all play fairly similarly, but have different ways of dealing with the various other meta decks.

While I’m definitely fond of the number of potential partners Zoroark can have, in my testing, the variant I’ve come to love the most has turned out to be one of the most straightforward. I initially began with “Zoroark + secondary attacker” builds, but I quickly came to appreciate just how powerful Zoroark-GX is as an attacker by itself in the Expanded format. Not many partner Pokemon can come close to reaching 210 for a Double Colorless Energy, as early as turn two! So, rather than try and find a strong partner for Zoroark, I instead focused on the strengths and weaknesses of the “straight” builds, and tried to account for them without impacting the consistency or spirit of the deck. I ended up deciding on a “Lonzoroark” build (the Zoroark-GX / Seismitoad-EX / Alolan Muk deck created by Pacific Northwest players), as it felt a bit smoother to play and seemed to have plenty of wiggle room in the decklist.