Hello, PokeBeach! My name is Zakary Krekeler, and I have the privilege of being your newest article writer! For those of you who don’t know me, I’ve been playing the Pokemon TCG for well over a decade now (my first worlds invite came as a ten-and-under in 2004), and have managed a good number of accomplishments along the way. In the Masters division, I am a former Regional Champion (St. Louis) and State Champion (Tennessee), to go along with multiple other Regional Top 8s, Nationals day twos, some Worlds invites, and many other smaller accomplishments. This year, I’ve managed to climb to 702 Championship Points, a number which makes me the number four ranked player in North America. And most recently, I was the finalist of the European International Championship, a feat I achieved with my Silvally-GX / Celesteela-GX  deck.

Since Silvally has proved to be such a trusty companion this season, I thought it a fitting card to focus on for this first article! Indeed, Silvally has made a bit of a splash since its recent release in Crimson Invasion, not only in my own decks, but in many other competitive archetypes as well. As such, while it has been overshadowed a bit by other decks, it has proven to be worthy of at least some consideration. So, what is it that makes this card good, and what is it that seems to be holding back these variants from being tier one?

In this article, I’ll be doing my best to answer that question. While doing so, I’ll also be going over matchups for this deck in Standard, touch on its potential in Expanded, as well as provide a brief look to the future of Silvally with the release of our next set, Ultra Prism. 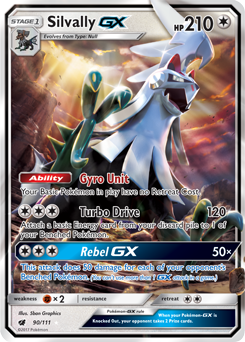 Before I go into the deck variants with this card, let’s look at Silvally itself. There are four main things to note about this card: its two attacks, its Ability, and the type-changing Memory cards which it can utilize.

First, the attacks. Both are rather strong in the proper situation, although which is more useful depends on your matchups and deck design. Rebel GX is a devastatingly powerful GX attack when used at the right time, particularly in this Brigette-dominated format. It’s far from uncommon to hit for 200 or 250 with Rebel GX early in a match, which, when hitting something like a Decidueye-GX, Golisopod-GX, or unsuspecting Gardevoir-GX, can easily turn the tide of the game into your favor. In both my Silvally / Metal and Xerneas / Silvally decks, Rebel GX quickly became my GX attack of choice for that reason. The threat of Rebel can also give you an advantage as your opponent tries to play around it (such as by not benching as many Pokemon) — even without attacking, an energized Type: Null or Silvally-GX can affect the game! There have been many times when my opponents have unknowingly “played into” Rebel GX as well (by overfilling their Bench), which again, can decide the fate of a game.

Turbo Drive, in contrast, is excellent for utilizing a two-hit strategy. In addition to setting up Knock Outs on anything it hits into (with a Choice Band as a follow up, two Turbo Drive attacks can reach 270 damage), it also sets up another attacker for you while doing it! This lets Silvally synergize perfectly with Acerola in decks that utilize Double Colorless Energy (which, you would expect pretty much all Silvally variants to do), as it means you just have to pick up your damaged Silvally, then immediately begin attacking with whatever threat you had set up the turn before, whether it’s something like a Celesteela-GX, Drampa-GX, or even another Silvally-GX. More importantly, by setting up another attacker, you will be able to respond to a given threat, even when your opponent does manage to Knock Out one of your Silvally-GX. When mixing and matching types in your deck, this also means that you should be able to respond to their attacker with whatever your deck’s best option is against that attacker. Not only does this mean your deck will have incredible “flow” from being able to successfully stream attackers, but it will also ensure that you are able to use the best attacker for a given situation. This kind of strategy, in particular, is critical to the success of decks like Silvally / Metal.

Of course, given that this is a Silvally, you aren’t necessarily restricted to only hitting for 120 with Turbo Drive. In fact, given the right Memory attachment, you can OHKO Pokemon such as:

In addition to getting valuable Knock Outs, the Memory cards also let you get those Knock Outs without using your more valuable GX attack. For many matchups, Psychic Memory and Fighting Memory can be the key to victory.

Of course, Silvally has one more trick to ensure that your deck continues to “flow”! As an Ability, Gyro Unit is wonderful for setting up your early-game consistency. “No bad starters” is a reality for most Silvally GX decks, as Gyro Unit means you can almost always switch out of an otherwise cumbersome starter. This gives Silvally decks even more flexibility, to include tech Basics such as Mr. Mime or Giratina, as well as to utilize high-retreat Pokemon such as Celesteela-GX without also needing to include multiple counts of switching cards. It also lets you use Max Elixir to its fullest potential. An example there would be after a Knock Out, you can bring up a non-ideal attacker such as a Oranguru or Tapu Lele-GX, use Max Elixir onto your secondary attacker or a Type: Null (basically, whatever you actually want to get the Energy on), then bring up the attacker you wanted to use in the first place. This gives you more options than you would otherwise have in such a situation, as it means you aren’t necessarily “locked in” once you bring up your Active — you can instead adapt your strategy depending on your draws or Max Elixir hits.

What makes Silvally so versatile, more so than even other Colorless attackers, is that it has not just one, but all of the above properties, so that it can play many different roles within a deck. I’ve used the card as a powerful early attacker, as a finisher, to power my setup, and as a glorified Float Stone. This isn’t to say that it fits in everything. But, depending on the goal and needs of your deck, Silvally may be what puts it over the edge in terms of competitiveness.

Now that I’ve gone through a bit of the specifics of what makes Silvally viable, I’m now going to show, using my deck lists from the EUIC and Memphis Regional Championship, two different (yet also similar) ways it can be played in a deck. So, for those of you who haven’t seen them, here are the two decks:

Both decks will note some pretty important similarities. Both play heavier counts of Max Elixir, to go along with a decent amount of both Basic Energy and Double Colorless Energy. Neither deck plays either switching cards or Stadiums, and the lines of Trainers in both are fairly similar.

Both of these decks utilize what I like to consider my “Silvally Skeleton”. Basically, this is what you can include in pretty much every Silvally-based deck.

22 Open Slots, 10 should be Basic Energy

As you can see, there are quite a few open slots! 10 of those should be reserved for Basic Energy, and 7 – 10 should go towards your secondary Pokemon. The remaining slots can go toward tech Supporter cards (such as Psychic Memory, Fighting Memory, Acerola, or others). Basically, you have a lot of room to adapt the deck into something completely different!

The amount of success seen by any standard Silvally deck will, in my opinion, be determined by how well the deck is able to continually attack (and with the right Pokemon for the situation). “Clunky” should not be a word used to describe these deck variants! This skeleton has managed to maintain that property with pretty much everything I’ve tried it with. It’s typically best to pair with an attacker that utilizes Double Colorless Energy (though this isn’t a hard rule), as well as some other Pokemon that can accelerate Energy early (such as Registeel, Xerneas, and Tapu Bulu-GX). There are many different variants that can be played with Silvally — other examples I’ve seen or built have been Silvally / Volcanion, Silvally / Tapu Bulu-GX, Silvally / Raichu-GX, and Silvally / Buzzwole-GX. Basically, what you play with it is up to you!