Welcome back, Beachers! I’m here to get you ready for Dallas Regionals, and for the Expanded format in general. As of this writing, nearly 1000 Masters are registered for Dallas, making it by far the largest Expanded tournament ever held. The Expanded card pool is massive, which can lead to some broken combinations but also some incredible innovations. Between parts one and two of this article series, I will attempt to cover the entire Dallas metagame as comprehensively as possible, but the biggest takeaway should be: in terms of decks, expect the unexpected.

Despite that huge variety in decks, just as in Standard, Zoroark-GX is an incredibly centralizing card. The metagame can be neatly divided into three categories: decks that utilize Zoroark-GX, decks built to beat Zoroark-GX, and decks built to beat Zoroark-GX’s counters. On paper, this makes the metagame look like a rock-paper-scissors situation. The reality puts it closer to rock-paper-scissors-lizard-Spock, with a few extra layers thrown in for good measure. In today’s article, I will be covering options to counter Zoroark-GX.

Primal Groudon-EX deck that falls firmly into the “built to counter Zoroark-GX” category. Anyone paying attention to online Pokemon TCG marketplaces will have noticed a huge uptick in interest (and price) for Tropical Beach. This card had an extremely small print run, as it was only given out to competitors and staff at the 2011 and 2012 World Championships. As a result, the card was valued at over $100 per copy. After the recent buying frenzy, its price has risen to $200 or more. The only Tropical Beach-containing deck to recently make Top 8 was Wailord-EX, under Drew Kennett at this season’s San Jose Regionals, so it would be within reason to assume that Wailord-EX was responsible for the sudden price spike. In reality, Primal Groudon-EX was the main culprit. 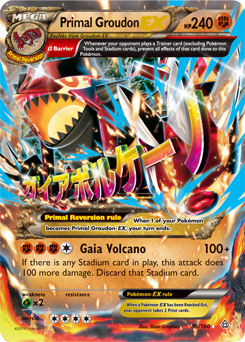 We need a Night March counter. Fortunately, Primal Groudon-EX has a massive amount of HP, so to OHKO it, Night March needs a correspondingly massive amount of Night March Pokemon in the discard pile (all 11 that aren’t attacking, in fact), plus a Choice Band. This is very difficult for even a Night March player to pull off, and even if they manage to do so, they are immediately open to some serious punishment from your Oricorio.

We also play three copies of Enhanced Hammer. If the Night March player decides to play more conservatively, attempting only 2HKOs, we can use Enhanced Hammer to knock off their Double Colorless Energy as well as Pokémon Center Lady to sustain our Primal Groudon-EX.

Every attack printed on Groudon-EX, Groudon-EX, and Primal Groudon-EX requires at least one Colorless Energy. This allows you to play some kind of non-Fighting Energy, even if only a single copy. Traditionally, this “off” Energy has been a Basic Psychic Energy, which allows Wobbuffet to attack if needed. However, since we are playing Oricorio in this list, we don’t need Wobbuffet to be our low-cost attacker. In fact, Oricorio usually fills that role more effectively, since it can Knock Out Pokemon on the Bench as well as the defending Pokemon. Because of this, we are instead running Warp Energy from Shining Legends. Starting with an Active Groudon-EX is pretty bad, and Warp Energy gives us one more out to retreating it.

Tropical Beach is certainly the entry barrier to playing this deck. The price of Tropical Beach pushes the total cost of the deck up by hundreds of dollars. Unfortunately, there is no good replacement for it. The deck’s main strategy is to stall with a Wobbuffet or a Robo Substitute active until you are ready to start taking KOs with Primal Groudon-EX. That means you are not going to be attacking for the first several turns of the game, so instead you activate the effect of Tropical Beach and end your turn with a hand refill.

Our entire strategy relies on attaching an Energy every turn. Any time we fail to attach an Energy, we are most likely a turn behind our opponent, so we play enough Fighting Energy to make sure we have one when we need one.