With two major Standard format Regional Championships in the books, now is the perfect time to think about how utterly insane our format is about to become in the next month. There is a perhaps intentional lull in Standard events, at least until the European International Championship. Yet by that point we will have two important sets legal: Shining Legends and Crimson Invasion.

In this second part of my two-part, two-set analysis, I’ll be going over the exciting new Standard decks that Shining Legends and Crimson Invasion bring us. Today, we’re full of ideas which include both pre-testing concepts and four deck lists. Keep in mind that this is all pertaining to the Standard format, so if you want something more relevant to Expanded, keep your eyes peeled on future articles.

A Brief Recap of Part I + Additional Considerations for Old Decks 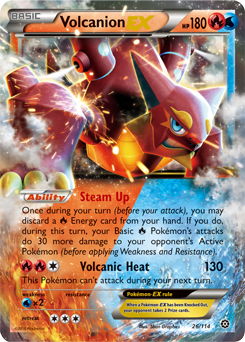 I really encourage you to read the first part of the “Lull,” where I go over a focused review of the cards in Shining Legends and Crimson Invasion, as well as updated lists of Tier One Standard decks. However, if you’re really pressed for time and only need bullet points, here they are:

However, before I continue on to the meaty new decks and inspirations, I wanted to address three cards very briefly. These are cards I felt either deserved a little more elaboration or attention than they got last article:

So that’s enough with wrapping up the old article – let’s jump entirely into the new stuff!

Okay, so right from the start we’re beginning with a very important new card. Venusaur’s Jungle Totem – like many Grass-type Abilities before it – is an obvious buff meant to increase the usage of Grass-type Pokemon.

Whenever such a buff comes out in a new set, I find it helpful to look first at any new cards that have obvious synergy with the new card, since it seems like the people who design the game over in Japan want more obviously good combos. This has held true in many of the strongest decks over the last five years, including Darkrai-EX / Sableye / Dark Patch (all from Dark Explorers), Blastoise / Keldeo-EX (all from Boundaries Crossed), and Night March (all in Phantom Forces). So for that reason, let’s look to other cards in Shining Legends and Crimson Invasion for the “obvious” new deck.

Enter Shining Genesect. a powerful non-GX Pokemon with theoretically “unlimited” damage potential. Although you won’t be hitting 1,050 damage often, Venusaur immediately doubles the output of Genesect’s Gaia Blaster, as well as accelerates your attacking speed by a turn. Below is what I consider a great, consistent starting point. 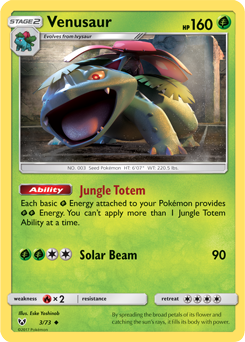 Many elements of this build parallel an average Vikavolt / Tapu Bulu-GX list, including a thick Stage 2 line, maximum Rare Candy, and Skyla to help fetch your copies Rare Candy or Ultra Ball to help get a turn two Venusaur. A key difference, however, is that your cards are not Energy hogs, and thus you require much less space to set up and keep attacking. I wouldn’t want to deviate far from this initial concept, so if you want extra space, consider cutting an Ivysaur, the fourth copy of Max Elixir and/or the eleventh Grass Energy. Two Choice Band can also easily be traded for two Fighting Fury Belt, which results in lower damage output, but increases the bulk of your Basic attackers (Shining Genesect) or Basic support Pokemon like Tapu Lele-GX.

Although you don’t technically ever need to get Venusaur into play in order to win games, it is the reason why you’re even playing Shining Genesect as a main attacker – hence the three Bulbasaur and three Venusaur. Running three of each means your odds of multiple Bulbasaur or Venusaur being in the prizes goes down drastically, and even against the worst matchups you should reliably get at least one Venusaur into play every game. Additionally, the single Ivysaur is added insurance in case you don’t hit the turn two Venusaur, but could be cut if you really need space.

It’s surprising to see a non-GX be the center attacker of a deck in Standard; however, with some minor effort, you can get a Shining Genesect loaded up with enough Energy to one-shot every Pokemon-GX in the format. Venusaur’s Jungle Totem makes these high damage thresholds easily attainable, which is why this card makes for an excellent new offensive option in Standard

As in many decks, Tapu Lele-GX is an essential element of your early-game setup. I run three copies in here because this count grants me good odds of starting with it, better odds of drawing into it throughout the game, and always at least one copy on standby for attacking. Keep in mind that Jungle Totem doubles Grass Energy on any Pokemon, meaning Tapu Lele-GX can hit for just as much as Shining Genesect.

For what little space there is in the deck, I’ve found room for a single tech Pokemon. That Pokemon can be many other cards, but for now it’s Pheromosa-GX, a card I discussed in detail last time as being a perfect revenge killer in Vikavolt. Since you can use Pheromosa’s GX Attack for a single Energy, that’s an easy Knock Out in close late game scenarios, letting Phermosa-GX play a critical role in comebacks.

Rounding out our Pokemon is Oranguru, which is used mostly for its Ability (Instruct). Despite the deck being very self-reliant when fully setup, it’s still very vulnerable to late-game Ns down to one or two cards. Oranguru helps fix that vulnerability, and may be vital in drawing the last game-winning card you need.

In past Standard-centric articles this season, I’ve addressed the importance of high Supporter counts and carried that logic over to my lists here. One key difference between this list and others I’ve posted is the inclusion of a single Lillie. I do not have the space right now for four N and a Lillie, but I can at least emphasize straight draw cards to make getting out a turn two Venusaur easier. In many hands you will oftentimes have a Rare Candy and only need to draw into a Venusaur – something Lillie can do without discarding your hand the way Professor Sycamore does. 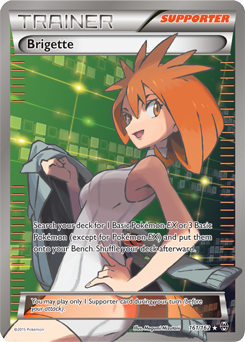 On PokeBeach and the rest of the competitive Pokemon TCG world, players continue to debate the merits of one Brigette versus two. My answer is “depends” – that is, it depends on how much work you need to do to complete your early game setup, and how badly you’d suffer if you prized a single Brigette. Venusaur desperately needs to fetch a Bulbasaur every game, so we’ll refuse to take chances and give ourselves the best chance of graduating it into a Venusaur.

Part of what makes this deck so threatening is its ability to get multiple threats into play at once while simultaneously threatening bigger damage. While Rapid Charger is great to keep Shining Genesect relevant, it’s Max Elixir that can push you into the scariest 180+ damage totals required to win against the top decks. Do you need four Max Elixir? Maybe not, but it’s always a welcome card in close matches, and can single-handedly keep you afloat in games where you cannot get a Venusaur into play.

Our list has several moving parts, including a bulky Stage 2, so we want maximum counts on both of these cards to accelerate everything.

We need to discard primarily two cards with these bad boys: Float Stone on Garbodor to keep our Abilities alive, and Fighting Fury Belt to get Volcanion-EX in KO range. I would like three copies, but for now I’ve found two to be the minimum I need.

Admittedly there is not enough space in here for big counts of either of these cards, but they’re both good. Choice Band helps Shining Genesect arrive at even more astronomical early game numbers, and Float Stone is a major player in turns where you need to promote a Pokemon, Max Elixir onto another, and then promote the Benched Pokemon to go on the offense.

This space exists mostly as a way to smooth out occasional bad Professor Sycamore discards, as well as to get Energy back in the deck. Energy Recycler or Rescue Stretcher both seem like tempting replacements, but neither are versatile the way Super Rod can be.

This Grass Energy count is enough to assure that we start our first turn with an attachment, yet at the same time have enough Grass circulating in our deck to help Max Elixir succeed.

Tapu Bulu-GX can be used as a bulky attacker that can take advantage of Jungle Totem to meet the Energy requirements of its Nature’s Judgment or Tapu Wilderness GX attacks. It can swing for large damage with less Energy commitment than either Shining Genesect or Tapu Lele-GX. It does not have a Weakness to exploit compared to Shining Genesect or Pheromosa-GX, which can come in handy in a seemingly one-sided matchup to Volcanion-EX or Ho-Oh-GX decks.

Changing the whole focus of the deck from aggressive beat-downs to spread and tech attackers allows you to attach less Energy to one attacker like Shining Genesect or Tapu Lele-GX to include options such as Tapu Koko, Turtonator-GX, Necrozma-GX, and even Shining Arceus. These tech options can take advantage of this neat Energy amplifier Ability and attack for far less Energy than they typically would!