With two major Standard format Regional Championships in the books, now is the perfect time to think about how utterly insane our format is about to become in the next month. There is a perhaps intentional lull in Standard events, at least until the European International Championship. Yet by that point we will have two important sets legal: Shining Legends and Crimson Invasion.

I’ve had a chance to review PokeBeach’s scans and translations of both sets, and it’s been a very long time since I’ve seen so many good cards released so close together. We’ll need a method to tackle the new format, which is why I’ll be dividing this series into two parts. In today’s part, I’ll be focusing on how three current top tier decks change, as well as how another doesn’t change at all. In part two I will focus on changes to the actual metagame, offering some lists for new decks as well as predictions about the new Tier 1.

Whenever a major expansion is released and an important tournament is on the horizon, players always debate whether the new cards will emerge as part of the best deck, or if the old decks will continue to reign supreme. Although the answer usually falls somewhere in between, the entire Sun and Moon block has shown us to trust new stuff more than usual. In each of the last three sets, we have seen a new card emerge as the center of a Tier 1 deck: first Decidueye-GX; then Garbodor; and then finally Gardevoir-GX.

Consider today’s article a focus on the “old”; a presumption that old decks will be the best-positioned to win the International Championship. That may not be true, but it’s certainly the easiest and most comfortable way to dive into big changes!

Listed below are the four decks I currently consider Tier 1. I’ll be offering fully fleshed-out lists for each, as well as explaining in detail why I think each deck deserved to be in Standard’s Tier 1 prior to Shining Legends and Crimson Invasion.

Don’t be sad if your favorite pet deck isn’t on here! There are about half a dozen other great decks that could win on any given day, which is why my discussion covers far more than just these four decks.

In the past I’ve written large, in-depth reviews about sets. Since we’ve got a two-part series with a ton of ground to cover, today I’ll only be highlighting cards that add something to every deck, or to select preexisting archetypes. I will not be addressing cards I feel will be centerpieces to new decks for now, but you can certainly look forward to that in a couple of weeks!

One last note: There are some cards that have potential to create new decks and enhance old ones. These could potentially pop up in today’s article – or maybe in Part II? – but are a lot more likely to pop up in part two. They could of course pop up in both articles!

As part of a long line of “revenge” Pokemon that started with Bouffalant, Shaymin gives Grass decks a cheap, non-EX tool to deal massive damage out of thin air. It doesn’t fit that elegantly in most decks, but it could certainly have a home in Vikavolt variants. Regardless, it has tons of potential to shore up shaky Garbodor matchups.

I tricked you! While Entei-GX is certainly an interesting card, I’m only talking about it here because I don’t really think it has a home yet in Volcanion. Guzma is more than enough for targeting Benched Pokemon, meaning Brave Blitz-GX doesn’t add much value to Volcanion. Its damage totals are also all very awkward, requiring one too many Steam Ups from Volcanion-EX to be effective. Perhaps Entei-GX has a better home in Expanded, where 150 HP snipes are more relevant.

Healing on bulky Water Pokemon is already annoying, so even “more” healing will prove to be an outright pain. Like Entei-GX above, two or three Manaphy on the Bench with an attacking Active Lapras-GX might have a better home in Expanded, but even in Standard it looks pretty neat. Add a copy or of Lana or two on top of that, and you’ve got a very resilient deck.

Essentially anything that runs Psychic or Rainbow Energy could potentially afford to play a Shining Mew. Although new decks — I’ll cover those in Part II — have a lot more to gain from Shining Mew than older decks, I wouldn’t be surprised to see archetypes like Drampa-GX / Garbodor teching it, or even previously retired concepts such as M Mewtwo-EX. The 30 HP is abysmal and might stop some people from running it altogether, but any deck that is locked onto single-Energy attachments could benefit greatly from this card. 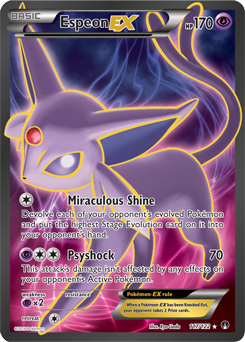 No, this card isn’t the same as Espeon-EX! Although it only devolves your opponent’s Active Pokemon, it deals damage and removes all evolution cards, which means bulky, powerful, and slow Stage 2’s lose a lot of momentum and can easily be looking at a sudden KO. Jirachi is a solid inclusion in techier Garbodor variants because with a single Po Town evolution or a Tapu Koko Flying Flip, Jirachi could potentially Knock Out Gardevoir-GX through devolution. That alone could tilt the matchup, so I’d encourage you to get at least one of these guys.

Keep a very close eye on Marhshadow because its Ability could potentially change the way some decks are built. It functions as a non-EX method of draw power, slightly inferior to Shaymin-EX, but it also functions as disruption to your opponent’s hand at any point in the game. Since you’re using this mostly for the Ability, it could splash comfortably into any list.

Cursed Vortex is a great Ability, as it is passive Retreat-lock for the entire game. While it could go nicely into any of top tier decks, your long term goal with such a card is to force opponents to waste Guzma until eventually a Pokemon incapable of Attacking is stuck with no way to Retreat until. You would then win the game through decking the opponent out.

This card is weird and should be played only in specific metagame situations, but if it’s played with a lot of Energy removal and of course several of your own Guzma copies, it could be a serious threat or even force people to play less commonly-used cards like Olympia.

In Japan, Zoroark-GX is clearly dominating thanks to a pool of useful rotated cards like Sky Field. International Standard unfortunately does not have nearly as many useful cards for the Zoroark-GX-centered deck, but its Exchange Ability is still promising in BKT-on. When combined with Mallow, you effectively get to search for cards from your deck — wow!

The main problem with this card is resisting the urge to splash it into decks where it isn’t needed. In preparing this article, I was actually tempted to put Zoroark-GX into my Volcanion over Oranguru and other cards; however, my better judgment prevailed, because I knew that inefficient but “cute” ideas are almost always bad ideas. Likewise, I’d encourage you to think carefully before changing up archetypes just for the Exchange Ability.

Except for a different Weakness and a Resistance, Hoopa is a word-for-word Basic reprint of Alolan Ninetales, released just two sets later. Hoopa is much easier to splash into decks because you aren’t forced to run an Alolan Vulpix, yet it still suffers the same problem: almost every deck has a good non-GX response, although Golisopod and Garbodor variants will manage poorly without Garbotoxin online. All in all I would refrain from using Hoopa just yet, but keep a close eye on it when revising your favorite deck.

Why would you want to move damage instead of Heal it with Potion? Well, I have one name for you: Drampa-GX In the past you had to place awkward damage onto your own Pokemon with effects like Rainbow Energy, Po Town, and Team Magma's Secret Base if you wanted to activate the damage bonus on Berserk. Now you can just let your own Drampa get hit and then immediately follow up with the biggest Berserk you can afford. Also, don’t count out Tauros-GX for a second. Mad Bull-GX is a fantastic Attack, but the one thing that has held it back since release is how easily an opponent can play around it. Now that Damage Remover is legal, you can effectively juggle damage on Tauros-GX, score a mean Mad Bull KO, and never let yourself become too vulnerable.

Finally, Warp Energy is a great relic of the past, but it’s always a great struggle to find the right deck for it. That’s because using your attachment for a Switch effect and nothing more oftentimes does you little good. At first you may think Warp Energy is a great inclusion in Golisopod; however, it’s actually unnecessary and inefficient when compared to all the Float Stone, Guzma, and Acerola you’re already running. Warp Energy honestly makes more sense as an insane combo-streamer in a deck like Greninja BREAK, where you could at least activate three Giant Water Shuriken in a single turn.