Top of the morning, PokeBeach readers! I feel like all of my articles get written either immediately after a class or, in this specific instance, during a class. Which class am I taking, you may ask? Public relations, of course! As many of my readers know, I study advertising and marketing at a college near Toronto, and more often than not I find myself drawing parallels between my major and my hobby. Much like recent metagame shifts, they’re all a result of prominent advertising schemes. This can be demonstrated from my last article I had posted on PokeBeach — I was discussing how I thought Alolan Ninetales-GX was an amazing play, given the field had a small amount of Mr. Mime to counter the deck’s Bench-hitting attacks. We’ll get into this later, but to spoil the answer for you, this Alolan Ninetales deck was underrepresented at the recent Hartford Regional Championships. Due to an impressive meta call from Igor Costa, he was able to win the whole thing with his Volcanion deck, but this deck has an absolutely terrible matchup against Ninetales due to its natural Water-type Weakness.

So why did I opt to not play Alolan Ninetales? That answer is simple: Russell Laparre is an online sensation within the Pokemon community, and while he may not be regarded as “the greatest of all time”, his insight into the game is stellar, as well as his vast knowledge of trends. At the tournament where Alolan Ninetales had popped up alongside its pilot, Michael Pramawat, Russell ended up taking him down in the finals with his Gardevoir-GX deck. The catch? Russell included a copy of Mr. Mime in his deck. My bet is that if Russell wasn’t there to prevent Pramawat from winning, Alolan Ninetales would be a much more popular deck! One trend that has correlated in Pokemon throughout the years is that people tend to not look at the second-place deck, because the first-place deck always outshines it. Why this phenomenon exists, I have no clue, but we can use this to our advantage to plan for upcoming tournaments given they exist within the same format (ex. Standard, Expanded, new set blocks, etc). Today, we’re going to dive into what I played for the tournament, why first place doesn’t always mean first, and then talk about the winning Volcanion deck!

For Hartford, I decided to play Golisopod-GX / Garbodor. Below is the list I used to pilot myself to a 19th place finish:

Overall, this list worked wonders for me — it had barely any hiccups, and was already proven since my friend Marc Lutz had piloted it to a first place finish at the Regionals in Bremen, Germany. I found most card counts were optimal, but there were a few looming card choices that could have pole vaulted me further ahead of the competition. If I had a chance to redo the list, I’d make the following changes: 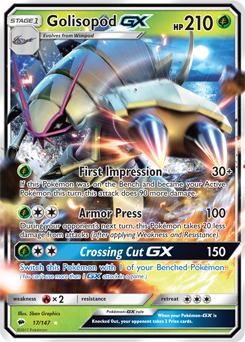 While these are slightly unorthodox views for the deck, I felt as if this version would’ve combated the field much better. Tapu Fini-GX was underwhelming, only being used once or twice the entire tournament. When I did use Tapu Storm GX, it was usually because I was losing the game anyway. This goes hand in hand as to why I’d cut Rainbow Energy as well; it’s too susceptible to Enhanced Hammer, which was included in all sorts of decks over the course of the weekend! Due to this sudden uprising in Energy denial, it’s best to play it safe with higher counts of Basic Energy. In my match against Michael Long, he was playing a Greninja variant that included two copies of Enhanced Hammer in order to prevent crucial attacks from connecting. Michael was banking on the chance I wouldn’t draw into an Energy after a late game N — much to my luck, I was able to draw out of it, but sometimes this isn’t the case!

The fourth Acerola would’ve been clutch in matchups where they aren’t able to KO Golisopod-GX in one shot. A few of these matchups would include against Garbodor / Drampa-GX, Espeon-GX, Gardevoir-GX, Vikavolt / Tapu Bulu-GX, and many more. Acerola is one of the many reasons why Golisopod-GX is so popular, and that’s because it’s good. Being reminiscent of AZ, Acerola is a card that creates a hill so tall that some decks just can’t climb up it! By playing the fourth copy, it also makes the deck more fluid and have a lower maintenance cap — all you need to do to keep a steady damage flow is pack an Acerola in hand. Late game N to bring you down to one card? Playing the extra copy of this card will allow you to have higher odds of drawing into it in dire scenarios. It also has niche uses with Tapu Lele-GX, being able to reuse Wonder Tag if this support Pokemon ever gets damage on it. This is the only scenario where I truly love Rainbow Energy, but besides that I wouldn’t miss it.

Excluding Oranguru was an oversight that I could’ve included the night before; I was in my hotel room testing against a few good friends, and they told me I should be inclined to add it in. My opposition was that I thought using Oranguru would conflict with the strategy of the deck! Why would I use Oranguru when I would have Garbodor in play? Could I afford the Bench slot for Oranguru? Probably not! But throughout the tournament, I came to realize all of the scenarios that I would’ve utilized this ape. One common scenario was when my opponent used a Field Blower to discard my Tool on Garbodor — I could have used Instruct to draw into a fresh Tool, or even to draw extra cards, pre-Tool attachment. I also could have used Instruct in a matchup where I didn’t need Garbodor out, or when I was too slow to get Garbotoxin into play. Lastly, I felt as if Oranguru was missing – most of the games I lost were because I took an early lead, and was unable to draw out of a late game N. Sure, there may have been some scenarios where I would’ve had both Oranguru and Garbotoxin in play (rendering it a borderline useless Bench spot), but I’d rather have it there just in case! Coupled with the second copy of Field Blower I would’ve played, even in the late game N stages, Field Blower would then become a live card by being able to remove the tool from Garbodor, thus shutting down Garbotoxin, and allowing you to use Instruct for the game-winning cards. Also, Oranguru makes a pretty sweet attacker in some scenarios! The ape is excellent against Alolan Ninetales, as well as Fire-type decks.

The second Field Blower was a lapse in judgement based on my metagame prediction for the event. I didn’t expect Drampa-GX / Po Town to be so successful, and boy was it ever! I ran into this deck two or three times and, while I know Golisopod-GX is favoured, the deck is ridiculously consistent due to Big Wheel GX, and they also are able to mop the floor with you if they get a Po Town into play turn one. When you evolve your Wimpod, they’ll instantly take 30 damage, which allows a Drampa with a Choice Band to OHKO a Golisopod-GX given they have a damaged Benched Pokemon! The only solution we have to OHKO a Drampa-GX on a rampage is with Crossing Cut GX, but that requires us to have an Energy on our main attacker already. This is difficult in this matchup since we rely on Acerola to heal almost every other turn, and the use of Acerola sets us back an Energy attachment every turn! The best way to rid them of Po Town is by adding in an additional Field Blower to remove it from play promptly. If you opt to keep Garbodor in your deck list, the second Blower also aids in racking up damage for Trashalanche! I ultimately just decided to cut Garbodor from my hindsight list because I felt like it hindered the deck’s consistency and overall objective. It’s a fine addition, I’d just prefer it without.