This is the first time we’re learning Pokemon-GX will be able to evolve from other Pokemon. Pokemon-EX are unable to do that, spare for Mega Evolutions, which themselves are a different mechanic than Pokemon-EX. Pokemon ex from the Ruby & Sapphire era were able to evolve from regular Pokemon, like Blaziken ex evolving from Combusken.

Like holo cards in this new Sun & Moon era, Lurantis-GX will feature a “wave” holofoil pattern.

The two sets will be released in Japan on December 9th and will feature over 120 cards together. In America, the sets will be combined into one set named Sun & Moon in February.

Thanks goes to Andrew C. and Franco T. for the translations! 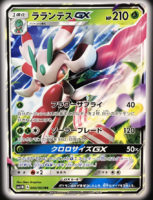 [G] Flower Supply: 40 damage. Attach 2 basic Energy from your discard pile to your Pokemon in any way you like. Correction: The attack grabs any basic Energy, not just Grass.

[G] Chloro-Size GX: 50x damage. This attack does 50 damage times the number of [G] Energy attached to this Pokemon. (You can’t use more than 1 GX attack a game.)

When your Pokemon-GX is Knocked Out, your opponent takes 2 Prize cards.