Hello PokeBeach readers! It’s Jimmy back with another guide on a few decks, this time I will be providing a good look at the Mega Pokemon in the Standard format. I will provide analysis on my current progress with M Rayquaza-EX, M Scizor-EX, and M Mewtwo-EX. In addition to this, I will be discussing Vespiquen. Without further ado, let’s get right into things by taking a look at M Rayquaza-EX. 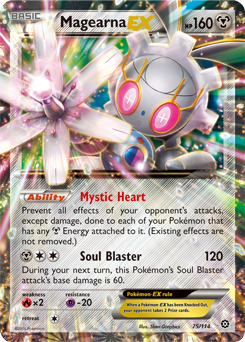 The deck needs Basic Pokemon, and this one is definitely a useful one. It can help a lot against M Scizor-EX if you are able to prevent the opponent from setting up Garbodor, or simply kill it once it comes out.

Pokémon Ranger deal with Giratina-EX which I have found to be pretty important in testing so far. I could see removing it from the deck if you find yourself beating Giratina-EX without it, or don’t expect Giratina-EX decks at the tournament you are going to. Pokemon Ranger allows you to play your Stadiums and Special Energy. It is important to keep in mind you will be unable to attack into a Giratina-EX the turn you play Pokemon Ranger because of Giratina’s Ability.

The Volcanion-EX strategy will definitely be to use counter Stadiums and N to attempt to prevent you from consistently Knocking Out Pokemon-EX in one hit with Emerald Break. This strategy was much more effective before Karen, and much easier to do against lists that don’t play Puzzle of Time. The key card in this matchup is Hex Maniac, which should be used in situations where an opposing Volcanion-EX or Flareon-EX might otherwise be able to reach the 220 mark and one shot a fresh M Rayquaza-EX.

The biggest threat in this matchup are the opponent’s Yveltal, but they usually aren’t enough to win the Prize-trade. It isn’t easy for them to continuously attack because they have to repeatedly power up attackers as you take a KO every turn. I usually try to take cheap Prizes on Pokemon-EX for my last four because it is relatively easy to just have back to back Lysandre after taking two Prizes on two Yveltal or Mew. Be sure to watch out for surprise Umbreon-EX plays.

The opponent’s strategy will be the classic “use a counter Stadium and N” routine, but is generally more effective due to Garbodor also being part of the equation. Getting Garbodor out, getting a counter Stadium down, and using N all while being able to make a relevant attack can be somewhat difficult to do though. This usually gives you plenty of time to take easy Prizes off of vulnerable Pokemon-EX early in the game. The issue with this is that cheap Prizes in the late game aren’t really a thing due to the low amount of targets that the deck actually has. This means that if you are put in a situation where an N plus a counter Stadium combo occurs while Garbodor is on the field, you have to recover a full board and take a KO on a M Mewtwo-EX. The good news is that you usually have a few turns to basically do nothing if you draw dead off of the N. This is because the opponent most likely wasn’t taking any Prizes during the period of time where they were setting up this huge comeback.

This is definitely the hardest matchup for the deck. Both decks have the same strategy of filling their Bench in order to do massive amounts of damage and take a KO every single turn. The difference is that Xerneas is not a Pokemon-EX and M Rayquaza-EX obviously is, which makes it very difficult for the Rayquaza deck to ever win the Prize-trade without having a much faster start. One of the biggest issues with Rainbow Road has always been its consistency, so it is definitely very possible for this to happen. However, if it does happen, I usually find the best route for this M Rayquaza-EX list to take is to target down Pokemon-EX and attempt to win the game with three Emerald Breaks.

This is not a matchup we want to be running into. They just have too much disruption for us to be able to outlast it and win the game. They have Crushing Hammer, Team Flare Grunt, and Garbodor. In addition to this, they can simply discard our Sky Field with M Scizor-EX’s Iron Crusher, which makes it so it is even easier for their Stadium to stick in play after a late game N.