What’s up everyone? It’s been a long time, but I’m back with a brand new article for you guys. A lot has been happening in my life lately, but I made sure to keep on writing and playing Pokemon. After weeks of playtesting with friends and teammates, I believe I’ve obtained a solid grasp on the new Standard format and thus began testing counter-meta strategies. A couple of them fell through, but I think I finally came up with one that fit the bill. This deck has been testing extremely well across the board, and I believe it could be a powerful sleeper pick for Standard Regionals such as those in Orlando or Fort Wayne this fall.

Throughout my playtesting of decks such as Darkrai-EX / Giratina-EX, Volcanion-EX, Rainbow Road, M Rayquaza-EX, M Mewtwo-EX, Greninja BREAK, Vespiquen, M Gardevoir-EX, M Scizor-EX, and several more, I’ve learned one thing for sure: We have an extremely diverse Standard format right now. With so many good decks currently seeing play, it has become increasingly difficult to find something that could answer a large enough portion of the meta and remain consistent at the same time. Regardless, I decided to let my creative juices flow while talking with my teammates about different cards in the format before taking my Darkrai variant to a tournament. I only own two copies of Darkrai-EX at the moment, so I needed to borrow a third copy from someone, since my list called for three of them. As luck would have it, no one had an extra copy available for me, so I was forced to either pick a different card or play another deck.

I really didn’t feel like building a new deck minutes before an event, especially due to one single card, so instead I opted to find a replacement. A simple solution would’ve been Yveltal-EX, but then I noticed a copy of the BREAKthrough Yveltal while I was flipping through my binder. After a minute or two of thought, I decided to try out the smaller Yveltal as a tech to counter Mega Evolution decks and other Pokemon Tools in general. This worked out extremely well for me during the course of the tournament, playing a huge role in my winning of the whole event. This experience then got me thinking about that particular card, and how I could use it to counter the meta more effectively than a simple one-of tech.

The name might have a similar feeling, but I can guarantee you that this version of Yveltal is vastly different from the one that saw success last season. One of the big reasons for that is the inclusion of three Yveltal from BREAKthrough. Why so many, you ask? Well, let’s take a look at what this card has to offer. 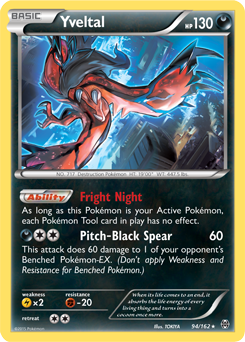 Yveltal offers a powerful attack in Pitch-Black Spear, dealing 60 damage to both your opponent’s Active Pokemon as well as one of his or her Benched Pokemon-EX. This is a lot of damage to be dishing out to a Benched Pokemon with no real drawback, allowing you to set up a single attack that can claim four Prize cards at once! Couldn’t we take fast KOs and claim four Prizes with other attackers, though? Well, absolutely! However, taking all four of those Prize cards at once has its advantages.

First of all, you get to soften up two Pokemon at once, as opposed to laying down the bulk of your damage on only one of your opponent’s Pokemon at a time. This means that even if your opponent finds a Switch, Escape Rope, or Olympia in time, it’s likely that both of their attackers have taken a substantial amount of damage. This can render switching out useless, thus allowing you to continue attacking regardless of whether or not they switch Pokemon.

Another benefit of taking that many Prizes at once is how well it can counter the disruption of a late game N from your opponent. If you can claim two Prizes early, you can then set up the board to win with a series of Pitch-Black Spears. These attacks can be chained even if your Yveltal is Knocked Out, largely thanks to Max Elixir and Double Colorless Energy. If you can keep a backup Yveltal with even a single Energy attached to it, you should be ready if your Active Yveltal bites the dust. At this point, it’s just wash, rinse, and repeat.

Finally, Yveltal has one more thing going for it, and that is its Fright Night Ability. Taking away the effects of Pokemon Tools is already a powerful effect, but when you insert it into a metagame full of Mega Pokemon, it becomes absolutely bonkers. Just imagine your opponent is playing a Mega-based deck and is unable to play his or her Mega Evolution without ending his or her turn because Yveltal is sitting in your Active spot laughing at them. This is precisely what happens against Mega decks, and why Yveltal has such a great matchup against virtually all of them.

To kick things off, let’s take a look at the Yveltal list that Neil Williamson piloted to Top 8 at the recent Oklahoma City ARG tournament.

This is a pretty straightforward Yveltal list, combining the disruptive power of the BREAKthrough Yveltal with the versatility of both the Yveltal-EX and the original Yveltal from XY for a very well-rounded deck.

The three copies of Mew allowed Neil to use Yveltal-EX’s attacks while still swinging with a single Prize attacker, which no doubt created problems for his opponents in terms of the Prize-exchange. Sure, Mew isn’t going to live long with only 50 HP, but it won’t need to if it takes a KO every time it attacks. With Max Elixir on hand to provide Energy acceleration, Mew can get going on the first turn quite often.

Next we have Umbreon-EX, who can take four Prize cards with a single attack, given that it KOs a Mega Evolution Pokemon in the process. The ability to draw Prize cards in chunks of four is absolutely insane, as mentioned above with the potential of Yveltal’s Pitch-Black Spear doing the same. 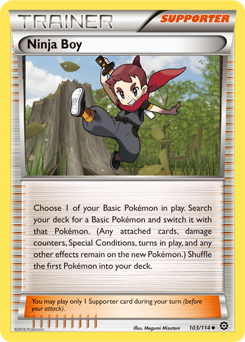 Another thing I want to point out in Neil’s list are the two copies of Ninja Boy. This card is especially potent for a surprise Umbreon-EX play, but Ninja Boy also can turn a little Yveltal into an Yveltal-EX for a massive Evil Ball out of nowhere. You could also do the opposite, swapping out the Pokemon-EX for a more control-based approach with our friendly neighborhood Fright Night Yveltal. Finally, you could swap out for a Mew in order to hit something for Psychic Weakness, such as M Mewtwo-EX, which doesn’t seem too bad either.

Then we have Delinquent, a powerful Supporter card that can serve a dual purpose. While Delinquent’s primary use is to get rid of Stadium cards, namely Parallel City, she also forces your opponent to discard three cards from his or her hand. The key here is timing. If you hold Delinquent until your opponent’s hand size is three or less, you’ll force them into top deck mode and likely gain a huge advantage in the process. You can also discard Delinquent early on in the game, leaving her in the discard pile as a scare tactic of sorts. If your opponent knows you could retrieve Delinquent at any time via VS Seeker, he or she will likely try to maintain at least four cards in hand at all times to avoid losing his or her entire hand to this card. If this happens over the course of a game, you can bet your opponent will have withheld a couple of plays to maintain a four card hand. This gives you more control simply by having her in your discard pile. Isn’t that fun?

You may have noticed that Neil opted to exclude some key cards like Hex Maniac and Float Stone from his list. While Hex Maniac would shut down both Fright Night and Memories of Dawn, it just seems too powerful to exclude from this list. Hex Maniac can be especially powerful when paired with Yveltal-EX as well as on the game’s first turn, shutting down potential Hoopa-EX and Shaymin-EX plays from your opponent. Regarding Float Stone, I understand that Fright Night would simply shut it down, but I worry about the deck’s lack of maneuverability without it here. If Olympia, Switch, or more copies of Escape Rope were present, I might not mind this so much.

Despite these minor shortcomings I’d noticed, I decided to try out Neil’s list as is before making any changes or further judgment. After playing a handful of games against the most popular decks in our current meta, I began to understand the deck’s strengths and weaknesses in these matchups, so I decided to make a few adjustments of my own.

While I believe that Neil’s list is extremely solid, I do have one problem with it: the deck seems to lack mobility outside of Ninja Boy. While Neil did run a lone copy of Escape Rope, I don’t see that being enough to deny Prize cards. Ninja Boy lets you switch to a different attacker, but it doesn’t get rid of the damage you’ve taken, which means you’re still going to have less HP to work with and are more likely to be KOd sooner.

With all of that said, I’d like to go over my personal Yveltal list and explain some of my key card choices.