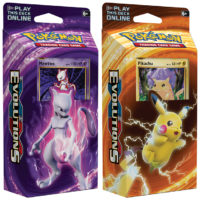 We now have English images of both Evolution theme decks, revealing they’ll feature Mewtwo and Pikachu! The set and its associated products will be released on November 2nd.

This is the first time we’re seeing English versions of Evolutions cards. Unlike the original Base Set cards, the HP is black instead of bold red, “Basic” is in a gold box instead of written out as “Basic Pokemon” above the Pokemon’s name, and the level has moved from the Pokedex box to the left of the HP. So basically they look quite different from the original cards.

Both Pokemon are in the same poses as their original Ken Sugimori artwork: