Another solitary leak on Twitter has revealed the new Brock’s Guts Trainer card from the 20th Anniversary Set CP6! Thanks to Vincent H. and Michael S. for the translation. CP6 officially releases this Friday, be we expect the set to continue leaking by tomorrow. 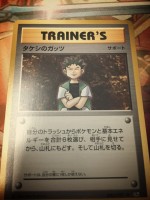 Shuffle 6 in any combination of Pokémon and basic Energy cards from your discard pile back into your deck.