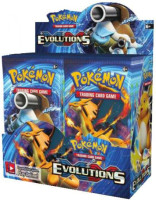 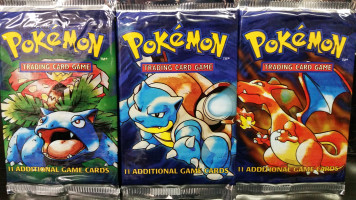 The booster packs for Evolutions will feature Mega Venusaur, Mega Charizard Y, Mega Blastoise, and Raichu! The three Mega Evolutions have the same poses as the original Base Set booster packs (though the nostalgia kinda falls flat because it’s hard to notice).

We actually received photos of real Evolutions booster packs several weeks ago (as you can see above), but I didn’t want to post them until the digital images were officially revealed.

As I posted several times over the past few months, Japan’s CP6 “20th Anniversary Set” will be released in Japan on September 16th and will feature “modern” reprints from Base Set as well as many modern cards like M Venusaur-EX, M Charizard-EX, M Blastoise-EX, Dragonite-EX, Ninetales BREAK, and Machamp BREAK. The set will be released in America on November 2nd as Evolutions.