Hello, all of you Beachers! Dalen again with another article for you guys. Relieving the anxiety and curiosity of Pokemon players everywhere, TPCi has finally released information on the 2016 – 2017 competitive season. In the announcement (a summary of which can be found here) we learned that Regionals will now be spread more evenly throughout the season, and that they will be both Standard and Expanded. With all of the National Championships in the past and the 2016 World Championships freshly completed, many players are still fixed onto Standard, as all Nationals and Worlds were Standard. So, in this article, I want to discuss the Expanded format to help readjust players’ focuses for Regionals, and I have one deck in particular I will discuss. This deck has seen tremendous play in the past, but has now fallen off of the map almost entirely; however, I still feel like it is a very strong deck and should not be underestimated. This deck is none other than Team Plasma, one that has seen immense success as well as play in the past. Notable finishes for the deck include 2013 Worlds Masters runner-up, 2013 Worlds Juniors runner-up, 2013 Worlds Seniors champion, and 2014 Worlds Juniors champion.

Players from the 2012 – 2013 competitive season are sure to remember this deck from Nationals and Worlds that year, as it was by far the most dominant deck. Plasma decks have many great features that make them so powerful, first of all, they are extremely fast. Thundurus-EX‘s Raiden Knuckle provides amazing Energy acceleration and recycling power, and Plasma was also gifted with Colress Machine to accelerate even more Energy onto the board. Not only are Team Plasma decks fast, but they are also quite powerful. Deoxys-EX, the core of the deck, can ramp up your Plasma Pokemon’s attacks by up to 40 damage with four Deoxys-EX in play. Most of the featured Plasma Pokemon also have naturally high-damaging attacks, like Kyurem and Lugia-EX. Combining strong attackers with all of the damage modification, Team Plasma decks rarely have difficulty taking KOs when necessary. Arguably the best aspect of Plasma decks, and by far my favorite, is their versatility (as seen below in the deck list). With all of the “multi-colored” Energy in the deck, Prism Energy and Rainbow Energy, you can effectively utilize any type of attacker to tailor the deck to a specific metagame.

Many of the cards in the deck list above are typical of Team Plasma decks and some cards can be easily justified for their particular inclusion. However, others are either so strange I feel the need to explain them or I just want to explain them to highlight certain points. 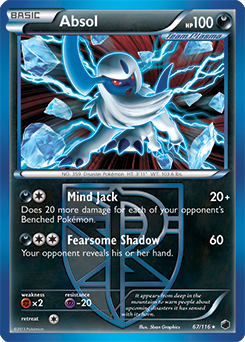 Ever since its release, Absol has always divided players on its usefulness. Some competitors have opted not to use Absol in a deck that can take advantage of it, notably Jason Klaczynski in his 2013 World Championships winning Darkrai-EX deck. Others, myself included, have always loved the card and used it whenever possible; for the longest time, I even ran two copies of it in my Yveltal-EX and Darkrai-EX decks to surprise players that didn’t expect it. However, this is a deck that I feel needs Absol no matter what, as it is simply too good to pass on. Absol has Colress Machine to allow for a one-turn power-up and Deoxys-EX to buff its damage. Even more, this Team Plasma deck abuses Sky Field to get more explosive starts with Hoopa-EX, and your opponents will often play more than five Benched Pokemon when they can, thanks to your Sky Field; Absol punishes these types of plays more than anything. The last reason I feel Absol is absol-utely worth it is because, like Darkrai-EX, it hits Trevenant BREAK for Weakness. Trevenant decks have had way too much success to ignore, so this deck is designed to have a naturally favorable Trevenant matchup, with which Absol can help greatly.

Many Expanded decks used Jirachi-EX as a consistency boost like Shaymin-EX, but Jirachi-EX is almost a must in this deck. With all of the one-of Supporters, Jirachi-EX lets you search out the one you need at the right time. Jirachi-EX is a great target to grab from Hoopa-EX, letting you snag a Colress to draw a ton of cards with the Bench you just filled up, or Professor Juniper if your opponent has too few Benched Pokemon for Colress to be worth using. Of course, Jirachi-EX can also be saved for later in the game to fetch Lysandre when you desperately need to Knock Out one of their Benched Pokemon. Either way you use it, Jirachi-EX is a stellar addition to any deck, especially this one.

Here are some other techs and possible inclusions I would consider switching to in the deck. When it comes to these techs, there are two pieces of advice I offer. Firstly, try to keep your deck aligned in the same general direction; don’t add cards like Hypnotoxic Laser if you plan to take most Knock Outs with Lugia-EX. Secondly, and most importantly, make sure that your deck is still consistent after you insert your techs. Even if your deck has a counter to every other deck but can only set up properly half of the time, you’ll still end up losing a majority of your matches.

Darkrai-EX is a very common card in the Expanded format, but a Team Plasma deck is the last place many people would expect to find one. This tech is one I learned from new PokeBeach writer Zander Bennett back in 2014 when I faced him at the Tennessee State Championships. Darkrai-EX’s purpose is to make it where you can Retreat without having a Float Stone attached, provided you have a Prism Energy or Rainbow Energy. Even though the ideal switching method is Keldeo-EX plus Float Stone, sometimes your Float Stone get discarded or you can’t attach one due to Item-lock (which isn’t too uncommon in Expanded with Seismitoad-EX and Trevenant being popular decks), so Darkrai-EX gives you a much easier time switching between Pokemon. Darkrai-EX is also quite an effective attacker against Trevenant BREAK, as it’s able to OHKO even their BREAK evolutions. All in all, Darkrai-EX is a very versatile and extremely beneficial tech in Plasma and I defintely would want to play it in most Team Plasma decks. 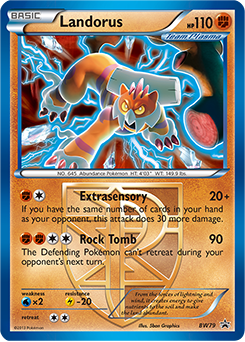 While Landorus is a very metagame-dependent tech, it is certainly a strong one. Landorus happens to be a Team Plasma Pokemon, getting Deoxys-EX’s spectacular Power Connect support, and it is Fighting, giving you even more type coverage against the wide array of Expanded decks. The main purpose of Landorus is to make KOing things like Darkrai-EX and M Manectric-EX much easier. Rock Tomb all but guarantees a OHKO on a Fighting-weak Pokemon, but due to its Energy-intensive cost it is rarely used. Instead, Extrasensory is Landorus’ preferred attack, able to get the job done the same for only a little more effort, you have to have the same number of cards in your hand as your opponent. Extrasensory can deal 110 damage with a Muscle Band attached and all four Deoxys-EX in play, which is perfect to one-shot M Manectric-EX or Darkrai-EX with Fighting Fury Belt. If you expect a decent showing of these Fighting-weak Pokemon at an upcoming Expanded event, Landorus would be a great tech.

Lugia-EX is already featured in this deck, but I would be quick to add another. Its Overflow Ability is one of the most powerful ones in the game, and its high Energy cost is mitigated by Thundurus-EX, Colress Machine, and Double Colorless Energy. While I wouldn’t focus the deck entirely on Lugia-EX, having a second copy would make the first one getting Knocked Out or discarded almost irrelevant. With Lugia-EX, you can have crazy games that can be over in as little as three turns. Take the following situation, for example, even if it may be a little hard to pull off:

You go second, starting with Thundurus-EX against your opponent’s Pokemon-EX. After their turn, you manage to get down a Lugia-EX and three Deoxys-EX thanks to Hoopa-EX and Sky Field. You end your turn by using Raiden Knuckle to place a Double Colorless Energy on Lugia-EX. After they deal some damage to Thundurus-EX, you retreat (either manually or with Float Stone) into Lugia-EX, attach a Plasma Energy and Colress Machine another Plasma Energy to it, beef up the Lugia-EX with a Fighting Fury Belt, and take three Prize Cards by KOing their Pokemon-EX with Plasma Gale. Your opponent is unable to Knock Out Lugia-EX on the following turn, so you simply Lysandre their Shaymin-EX, attach any Energy to replace the discarded Plasma Energy, and take your last three Prizes with Plasma Gale.

While games like that definitely won’t occur all the time, they can happen much more often than one might think. Colress and Shaymin-EX make the deck incredibly explosive, so never underestimate Plasma decks’ speed.