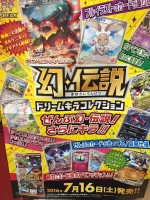 A new poster for CP5 Mythical / Legendary Dream Holo Collection has revealed what I predicted earlier — each of the full art Pokemon promos from our Mythical Pokemon Collections will also come as regular cards in the set. The poster reveals Jirachi and Shaymin with stock Ken Sugimori artwork.

The set features 36 cards, many of which have already been released in America: the 11 Mythical Pokemon promos as regular and full art cards (22 cards), Volcanion and Magearna as regular and full art cards (4 cards), Rayquaza-EX, Hoopa-EX, and Latios-EX from the Power Beyond Tins (3 cards), Zygarde-EX from the Shiny Kalos Tins (1 card), yet another reprint of Xerneas and Yveltal (2 cards), the White Kyurem Fates Collide prerelease promo (1 card), and likely some combination of shiny Xerneas-EX and shiny Yveltal-EX from the Shiny Kalos Tins, the Zygarde and Moltres Fates Collide prerelease promos, and/or one new card.

The 11 Mythical Pokemon “regular art” cards, Volcanion’s two cards, Magearna’s two cards, and all the cards from September’s 20th Anniversary Concept Pack set will almost certainly become our English set in November. That means our first Sun and Moon set will be released in America this February, and likely in Japan this December (based on past patterns).