As of this hour Pokemon GO is live in the Google Play and iTunes stores for Australia and Japan! It is likely the game will be released for the United States and other countries very soon, so keep checking back here for updates!

Niantic has published an official guide for the game to help get you started.

In the game you can join either Team Valor, Team Mystic, or Team Instinct, which are represented by the colors red, blue, or yellow (obvious throwback). Which house will the Sorting Hat place you in?! Just kidding, you can pick!

Candela: I’m Candela–Team Valor’s leader! Pokemon are stronger than humans, and they’re warmhearted too! I’m researching ways to enhance Pokemon’s natural power in the pursuit of true strength. There’s no doubt that the Pokemon our team have trained are the strongest in battle!

Blanche: I am Blanche, leader of Team Mystic. The wisdom of Pokemon is immeasurably deep. I am researching why it is that they evolve. With our calm analysis of every situation we can’t lose!

Spark: Hey! The name’s Spark — the leader of Team Instinct. Pokemon are creatures with excellent intuition. I bet the secret to their intuition is related to how they’re hatched. You never lose when you trust your instincts! 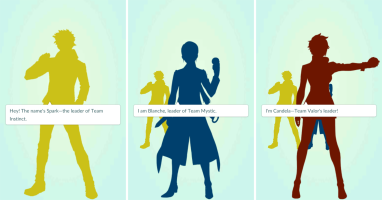 Update #1: I was able to download the game in the United States early. Here’s some notes: