An Arcanine BREAK promo (267/XY-P) will be included in September’s issue of CoroCoro Ichiban! Thanks goes to Vincent for the translation! Arcanine’s pose is very similar to Base Set Arcanine, which may be because Japan’s 20th anniversary set will be celebrating Base Set cards. 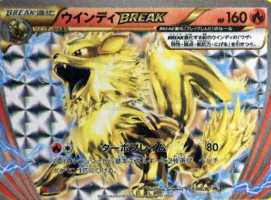 [R][C] Turbo Flame: 80 damage. Choose 2 basic Energy cards from your discard pile and attach them to 1 of your Benched Pokemon.